The Possibility of Music , by Stephen-Paul Martin 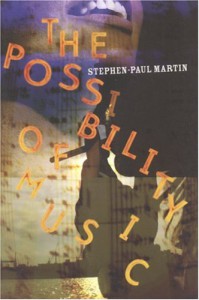 ...but now adds so much tension to the moment that time crashes like a battered biplane, like a tower made of syllables hit by lightning.

Looking for a change of pace, I went off grid to an author, Stephen-Paul Martin, of short stories and poetry who publishes in the smallest presses like the Margin to Margin Press and the aptly named Obscure Publications, to The Possibility of Music (2007), published by the University of Alabama Press with financial support from Florida State University and Illinois State University (WTF?! I said to myself.) And change of pace I found.

Consider the first story, "Impossible", which begins relating a nonexistent science fiction movie about aliens landing in Central Park in which the main character, a lab technician, tries to figure out what the aliens want,(*) segues into the life of the actor playing the role, and moves back to the movie character, now quite independent of the actor who has committed suicide off screen, as it were. Both the actor and the movie character are alienated from their lives and our contemporary American society (welcome to the crowd, guys!), and Martin slams that society with every other sentence. Though the habitués of Fox News would be outraged, they probably wouldn't pick this book up in the first place.(**) But the slamming is done with humor and even some lightfooted grace. The two-page rant on what the story is not about is priceless.

In the eponymous second story it initially appears that Martin has dropped the metafictional stances of "Impossible" and intends to give a straight lament of the dumbification of music and music listeners by commercial radio. But then the Loch Ness monster makes an appearance in the San Diego harbor and many layers of irony start to pile up, real fast.

The stories are permeated with thoughtful alienation, not only in all of the usual ways but also in the author's repeated appeal to unusual/impossible events which are necessary in order for some kind of change to occur in the turgid, taffy-like, apparently ineluctable flow of our society into the crapper, gleefully guided by the servants of the wealthy and powerful. Unfortunately, even unlikely events like Barack Obama's election to President of the United States of America have proven to have little effect on this flow. But hoping for aliens, or Loch Ness monsters, or glowing blue cubes which remove sections of spacetime bespeaks a desperation which goes beyond alienation. I feel yah, Steve!

When it comes to fiction, I am not a believer in "no pain, no gain." Martin's prose is graceful, amusing, entertaining, intelligently ironic, and that he is also a poet is unmistakable. The intricate interrelatedness of the stories (though they were apparently published in many separate small literary journals) and the high degree of self-referentiality are here aesthetically and conceptually successful, in my view. He is also obviously every bit as alienated from 21st century America as I, and for much the same reasons. But, then, perhaps I am such an irremediable pointy head that Martin and I and a handful of others are out here all by ourselves. So be it. I'm going to try to find some more of his work.

(*) They want to repair their ship and get the hell away from us as fast as possible.

(**) And please don't tell them that public universities are subventioning subversive, critical texts.(***) Particularly since FSU has just hired the former Republican leader of the Florida State Senate as its new president over the objections of its own faculty, who wanted, heaven forbid, an educator and academic as a president of their university. Well, the new president is going to get them pointy heads into line real quick like.(****)

(***) If one of you is actually reading this, relax: your precious world is really not endangered by this book. Are you really going to begrudge us others this tiny little sign of life? I'm afraid I already know the answer...

(****) Unfortunately, though, I am sitting in a public university in Florida which is also searching for a new president...