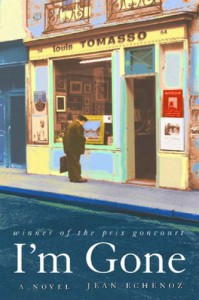 [This book has been translated into English under the titles I'm Gone and I'm Off.]

Jean Echenoz (b. 1947) is a French novelist weighted down by a dozen literary prizes, including the Prix Goncourt for Je m'en vais (1999), a cooly ironic intertwining of play with literary genres and of the emptiness of yet another protagonist's life.

A failed sculptor, Félix Ferrer owns an art gallery which has run onto hard times, so hard that he travels 100 kilometers above the Arctic Circle in search of a wreck containing a fortune in Arctic peoples' art. There are mysterious, dubious characters and also an art heist and murder. And there is the story line(s) of turn-of-the-millennium Parisians leading lives full of a desperate and pointless activity (centered about sex, money and, for one character, drugs) with an early emphasis on conceptual artists and their "collectors." Many easy targets for irony, and a great deal of material to stuff into a fairly short novel.

I grant that Echenoz keeps all the plates spinning, and he ties it into a big, anticlimactic bow at the end. But that is really not enough.

While reading this book, three other novelists insisted on repeatedly interposing themselves between me and Echenoz' text. Michel Houellebecq kept reminding me that Echenoz' distanced treatment of sexual relations - frequent and with multiple partners, but little better than a very temporary physical release in view of the total absence of emotional and other contact(*) - is but a pale, nay, a vacant reflection of his vituperative, repulsive, obsessive portraits of current sexual relations. Peter Handke quietly murmured next to my ear that Echenoz' extended passages about the Arctic quest shrivel into insignificance next to his profoundly poetic evocations of the beauty, the threat, the dread, and the wonder of modern urban man in the deadly vastness of the polar regions. And Thomas Mann shook his head disapprovingly at Echenoz' delivery of heavily researched literature - he and I both knew how much better he did it, time and time again, than Echenoz does.

And his language: the story is related all too often in a curious hybrid of colloquial constructions and something reminiscent of modern techno-bureaucratese, not in the vocabulary but in the manner of regarding and organizing the world. It fits the protagonist well, who only communicates to get what he wants: sex and money. Occasionally, Echenoz gives this diction a tweak that made me laugh. Then again, there are passages where Echenoz describes furniture, clothing, automobiles, buildings with a microscopic precision, and corners of Paris I have never seen receive more attention than most of the characters do. Why? To make it "real"? To display his writerly chops? I can't help but think that it is yet another distancing effect. At this point the reader is looking at the characters through the wrong end of the telescope.

Another cast of empty characters whose fates are a matter of indifference to this reader. Thus the gestures towards the "thriller" genre, the half-hearted attempts to generate some foreboding, some tension, fail completely for me. There is nothing innovative about the structure of the novel or its language. And coldly unemotive narration has become almost a commonplace over the past fifty years. A certain kind of cleverness is manifest in this text, and a certain kind of literary professionalism, as well. But I'll read some more Echenoz only because a few passages in this text suggested that he is, in fact, capable of much more.(**)

(*) Indeed, all the women are little more than empty symbols equipped with desirable bodies.

(**) Whereas the juries of the great literary prizes are all too frequently capable of completely mystifying decisions.