The Murmuring Stream , by J.D. Frodsham 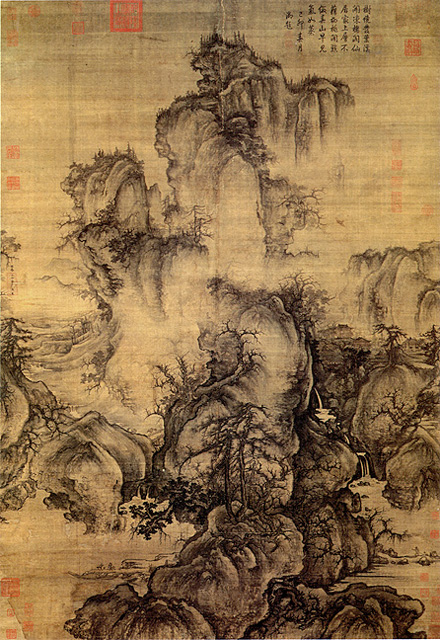 Quite intrigued by the selection of poems translated by David Hinton in The Mountain Poems of Hsieh Ling-Yün, I read J.D. Frodsham's two volume The Murmuring Stream: The Life and Works of the Chinese Nature Poet Hsieh Ling-yün (385-433), Duke of K'ang-Lo, (1967), which provides an 80 page recounting of Hsieh's life and times as well as English translations of all of Hsieh's extant poems in the first volume and explanatory commentary on the poems in the second volume.

Hsieh lived during what is called the Six Dynasties Period between the end of the Han dynasty and the beginning of the short-lived Sui dynasty (to be quickly replaced by the long-lived T'ang dynasty), when China was divided up once again into smaller states often warring with each other. Two of China's greatest poets (Hsieh and T'ao Ch'ien (Tao Yuanming, 365–427)) - very, very different sorts of men - lived during that period, as did a gaggle of lesser, but still interesting poets.

Hsieh's family was one of the most prominent in that age, and he lived in great luxury for most of his life. But the times were full of strife and rulers came and went, and when they did so, so came and went their entourages. Hsieh's highly educated brothers and cousins were among those entourages, as was Hsieh himself in a somewhat less committed manner, and because they mostly chose the losing side, most of them died young. Hsieh was also more distantly associated with a losing side, but because he was already recognized as one of the most important poets of his age, he was spared, for a time. Torn between making a mark in the government, which he knew was very dangerous, and staying at home in luxury to study Buddhism, Taoism and literature, he did both alternately. But powerful men whose toes he had stepped on eventually arranged for his exile and then beheading. Frodsham relates all the extant details in a very useful manner.

Though acknowledged during his lifetime and after as one of the greatest poets, relatively few of his poems have survived. Frodsham translates all of them, and I have to say that I generally prefer his translations to those of Hinton, who renders every classic Chinese poet in a very contemporary American poetic diction. Writing in an already ancient tradition, a tradition which had to be observed, nonetheless Hsieh brought some important new elements into Chinese lyric poetry. He, with T'ao Ch'ien, is viewed as founding Chinese Nature poetry, though two very distinct branches of it.

In Hsieh's case it was shan-shui (rivers and mountains) poetry. This is not to be confused with pastoral poetry; Hsieh's poetry is inspired by a mystic philosophy (in particular, by Taoism and Ch'an Buddhism) which sees all natural phenomena as symbols charged with a mysterious and cathartic power. A Western analogue was formulated some 14 centuries later in Romanticism, though the Romantic sublime was, it seems to me, primarily an aesthetic notion, whereas in the shan-shui tradition beginning with Hsieh, there is an additional component (and for some in that tradition the primary/sole component) of using the awesome mountain landscapes with plunging rivers at their sides and swirling clouds at their peaks, all experienced as a single ecological whole, to draw the reader's mind to contemplate li , the inner law (or inner pattern) of existence.

But Hsieh is no one-note poet, and so any sample is not representative. However, here is a very Taoist poem, one which suggests a (probably momentary) disappointment with the fruits of his striving. You need to know that the Winged Men are those who have attained the highest rank in the Taoist Orders.

The Southern land is tinged with fire by nature,

Upon its coldest mountains cassia grows,

From the Stone Stairway bubbles a scarlet spring.

Since this hill once deigned to be a hermit's refuge,

It would surely shelter a sage in his happy retreat.

A road to heaven and not just a mountain track,

I climb to the top where peak is piled on peak,

On into distance, climbing up to the clouds.

Not a semblance of the Winged Man do I see,

The Cinnabar Hill is a trap whence the fish have fled.

Pictures and documents too have all disappeared,

Not a trace of inscriptions, whether on wood or on stone.

None will understand me a hundred generations from now,

How can I know what happened a thousand years ago?

I shall do as I wish and go wandering off alone,

enjoying the moonlight and the play of the rushing streams.

I shall make the most of the fleeting moment's pleasure,

And never lose sight of the present through love of the past.

Nearly a hundred generations later, I believe I do understand him.