To Become a Sage , by Yi Hwang 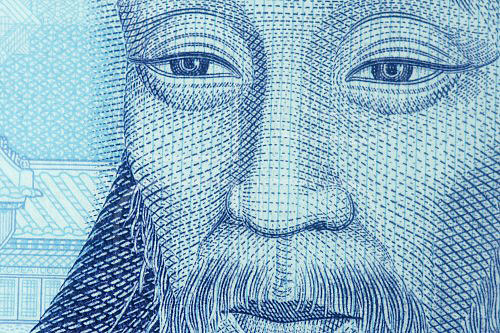 "And it is by the constant practice of mindfulness that one combines thought and learning." - Yi Hwang

Yi Hwang (1501-1570), more popularly known as T'oegye, is held to be the most important and influential philosopher in Korea's history, and his writings are still important to Korean culture, taught in the schools and available in print in multiple editions.(*) His thought was influential in Japan, but I do not know at this point of any waves it may have made in China. Of course, here in the West most of us know nothing of him; certainly, I read his name for the first time just a few months ago.

In my review of The Four Books: The Basic Teachings of the Later Confucian Tradition, I briefly sketched the historical and intellectual context of the dominant Ch'eng-Chu school of neo-Confucianism, which extended the social, ethical and political philosophy which was developed during the Han dynasty (contemporary with the Roman Republic/Empire) on the basis of Confucius' writings and reported sayings to include, in reaction to Buddhism, a metaphysics, a psychology and a Confucian foundation for internal self-development and meditation.

T'oegye lived during the turbulent times which marked a vulnerable period for the Yi dynasty (1392-1910) and the subsequent purges and executions Yi dynasty kings carried through in order to reaffirm their power.(**) As a minor yangban (member of the literati/official class), he served in various capacities but repeatedly resigned to return to his country retreat in order to study and write. As his renown grew, this became increasingly difficult.

But, entirely self-taught, he managed to acquaint himself in intimate detail with the most important neo-Confucian works, particularly with the letters of Chu Hsi (Zhu Xi, 1130-1200), the man who formulated the version of neo-Confucianism which became orthodoxy in China for more than six centuries (and who is the primary focus of the above-mentioned review). What T'oegye especially valued about Chu's very extensive correspondence was its emphasis, in contrast to his books, on the process of self-development, which was a particular focus of T'oegye's thought.

Sŏnghak sipto (The Ten Diagrams of Sage Learning) was T'oegye's last major work,(***) written in 1568 for the king of Korea to guide him in his life and reign, and was apparently a kind of summation and distillation of his thought and long pedagogical experience. Though "sage learning" refers to the kind of knowledge a ruler must have in order to rule wisely, this text is anything but Machiavellian Realpolitik. The neo-Confucians in general, but T'oegye above all, believed that there was a path of self-cultivation (which they called the "learning of the mind-and-heart") leading to sagehood which was the same for rulers and for the rest of us. Sŏnghak sipto is a highly condensed précis of this path, but the translator/editor supplements the original text with commentary drawn primarily from T'oegye's other, more expository writings in order to ease the difficulty of grasping the author's intent.(****)

The original text is divided into ten sections, each consisting of excerpts of central neo-Confucian texts supplemented with commentary by Chu Hsi and T'oegye himself. Each section is provided with a "diagram" intended to aid the subsequent pondering of the texts. Kalton adds to each section his own explanatory commentary.

This is not the place to provide an exegesis of neo-Confucianism,(5*) which in Chu Hsi's hands became a philosophically grounded, humane asceticism not unlike the version of Stoicism practiced by Romans such as Seneca (in which duty, service and family play important roles which are less emphasized by many Greek Stoics), but I do want to at least hint at what is viewed as T'oegye's original contribution, a contribution which led to the subsequent parting of the ways between Korean and Chinese Confucianism (or at least their dominant schools).

As mentioned, an important new element of neo-Confucianism with respect to earlier Confucianism is a psychological theory intended to elucidate the composition and functioning of the human psyche, and believe me when I reveal that it has nothing to do with Oedipal complexes and infantile sexuality.(!) This theory is a bit complex, and there is no Western counterpart I could easily refer to. But in the neo-Confucian relation between the psychology of the human and the metaphysical structure of the universe there is a problem that does have a kind of counterpart: the Question of Evil. You see, ever since Mencius (Meng Tzu, 4th century BCE) the fundamental goodness of human nature has been an essential component of Confucianism. And yet one needn't live long to realize that there are human beings who are not good. This is not a problem for old-style Confucianism to explain, but it is for neo-Confucianism, since it must now explain how its metaphysically grounded psychology can allow this phenomenon without upsetting the philosophical applecart elsewhere. Suffice it to say that T'oegye addressed just this point in his famous Four-Seven debate with another Korean philosopher, and it was his analysis of the question (if not his answer) which set the course of Korean Confucianism until the present.

It is in this book that I believe to have glimpsed the beating heart of neo-Confucianism. I'm going to look into this much more closely.

(**) T'oegye's elder brother died in one of those purges.

(***) Michael C. Kalton provides a translation of Sŏnghak sipto and extremely useful explanatory apparatus in To Become a Sage (1988). It is also available in French translation under the title Etude de la sagesse en dix diagrammes.

(****) The pronounced distillation is due to T'oegye's intent that the "diagrams" be drawn/written onto screens to be placed in the King's room and into a small handbook to be placed on his desk so that he may review and ponder them at length. Such was T'oegye's prestige that this was actually done. Almost immediately, the text was circulating among the literati, as well.

(5*) Neo-Confucianism is much more interesting philosophically than both Confucius' original writings and the instrument of State that Confucianism became during the Han dynasty.