In Praise of Shadows , by Tanizaki Jun'ichirō 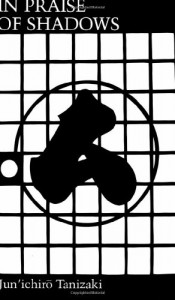 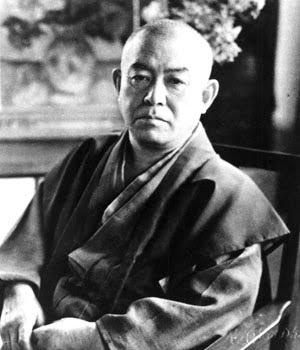 The quality that we call beauty ... must always grow from the realities of life.

In Praise of Shadows, written by the well known Japanese novelist Tanizaki Jun'ichirō (1886-1965) in 1933, is a particularly charming and discursive rumination on the differences between Japanese (indeed, East Asian) and occidental aesthetics (among other matters). It is also an illustration of the differences between the Japanese tradition of zuihitsu ("to follow the brush"), of which In Praise of Shadows is a most worthy modern exemplar, and the occidental tradition of the essay.

Ranging from toilets to hospitals, from architecture to paper, from writing and eating utensils to cuisine and sweets, from theater to feminine beauty, Tanizaki meditates on the differences, as he sees them, between East and West - subdued, tarnished, natural versus bright, polished, artificial; the cloudy translucence of jade versus the brilliant sparkle of diamond; the flickering half-light of the candle versus the steady glare of electric light.

Tanizaki was a cultural conservative and much preferred old Japan to new Japan (you won't find many photos of him in western garb). He quite rightly points out that if East Asia had been left to its own devices instead of being forced into the "modern" age in the nineteenth century, it may have "advanced" much more slowly but would have invented technology, devices, fixtures much better suited to the aesthetics of its people than the objects it found itself obliged to receive from its "benefactors."(*)

But let Tanizaki speak for himself - here is a passage where he draws some of the aesthetic consequences of the contrast between the low, heavy, wide roofs of East Asia and the relatively high, light, small roofs of the West (he likens the former to parasols and the latter to caps).

And so it has come to be that the beauty of a Japanese room depends on the variation of shadows, heavy shadows against light shadows—it has nothing else. Westerners are amazed at the simplicity of Japanese rooms, perceiving in them no more than ashen walls bereft of ornament. Their reaction is understandable, but it betrays a failure to comprehend the mystery of shadows. Out beyond the sitting room, which the rays of the sun at best can but barely reach, we extend the eaves or build a veranda, putting the sunlight at still greater a remove. The light from the garden steals in but dimly through paper-paneled doors, and it is precisely this indirect light that makes for us the charm of the room. We do our walls in neutral colors so that the sad, fragile, dying rays can sink into absolute repose. The storehouse, kitchen, hallways, and such may have a glossy finish, but the walls of the sitting room will almost always be of clay textured with fine sand. A luster here would destroy the soft fragile beauty of the feeble light. We delight in the mere sight of the delicate glow of fading rays clinging to the surface of a dusky wall, there to live out what little life remains to them. We never tire of the sight, for to us this pale glow and these dim shadows far surpass any ornament. And so, as we must if we are not to disturb the glow, we finish the walls with sand in a single neutral color. The hue may differ from room to room, but the degree of difference will be ever so slight; not so much a difference in color as in shade, a difference that will seem to exist only in the mood of the viewer. And from these delicate differences in the hue of the walls, the shadows in each room take on a tinge peculiarly their own.

Along with all the elements mentioned above, the free floating form of zuihitsu permits Tanizaki to comment on the complaints of the elderly, street lights, even throw in a recipe for a special kind of sushi. I must warn you that there is some remarkable rubbish in this zuihitsu,(**) but there is also eloquent insight into, in some respects, Japanese sensibilities in general and, throughout the text, the sensibilities of one of the most important novelists of the 20th century.

(**) Such as a startling disquisition on why the Asian's prediliction for shadows is a consequence of his not quite perfectly white skin!