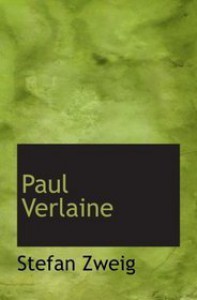 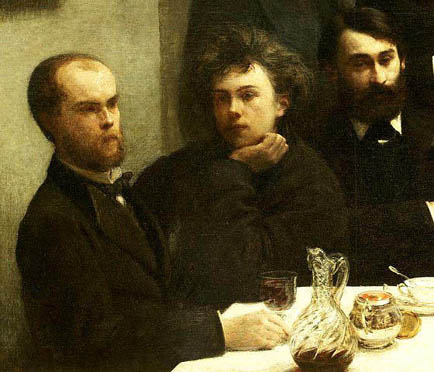 I chanced upon this little book while looking for a good biography of Paul Verlaine,(*) and though Stefan Zweig (1881-1942) apparently wrote Paul Verlaine when he was 23 years old, he was already in full possession of his prosodic powers and psychological insight. In a finely honed turn-of-the-century prose Zweig indicates in broad strokes the life of a man he presents as weak and easily influenced, though highly gifted and sensitive: from the perfect childhood through the beginnings of the fall when he was placed in a Parisian boarding house at the age of 14 so that he may study in a Parisian school, through the addiction to absinthe and the oh-so-brief career as a bureaucrat in the Parisian City Hall, through the arrival from the provinces of some stunningly new poems by a fifteen year old prodigy, through the obsessive, self-destructive relationship with said prodigy - which ended not with the famous gunshots and the two year incarceration in a Belgian jail, but with a tragicomic drunken brawl on the banks of the Neckar after Verlaine was released and tried to convert the young monster to Catholicism; Rimbaud was just about ready to say adieu to literature and to Europe - through the long years of artistic and physical decline after the apogee of the passionate poems of religious fervor written in the Belgian prison.

It is particularly of this last and longest period in Verlaine's life that I learned the most from this little book. Zweig argues convincingly that Verlaine's belief flagged once again, leaving him only with a nostalgia for belief, but that he was trapped in a role he felt he could not abandon. Curiously, while generating reams of Catholic poèmes d'occasion Verlaine also published work Zweig characterizes as pornography, both for much the same reason: money.(**) The final years of Verlaine's life are most regrettable as he alternated absinthe soaked revels while wearing the tattered costume designed for him by the newspapers with longer and longer stays in hospitals.

Zweig quotes freely from Verlaine's poetry and Confessions, working them seamlessly into the text to illustrate his points. Along the way we also learn what the young Zweig thought about poetry in general and about the failings of French poetry in particular. As a good Germanic Austrian he found the art of French poetry to be too abstract, too distant from the sources of great poetry. He asserts that, next to Villon, Verlaine was the first lyrical genius of France, but that Verlaine's prose and sole piece for the theater are of interest only for insight into Verlaine's life. Zweig writes, "er hat ja nie die Welt recht verstanden und nur gewusst, sich selbst zu erzählen."(***) That could well be true...

(*) There are many biographies of Rimbaud, but I am still looking for a modern biography of Verlaine. This book is available free online in English translation, and the original German edition (with excellent illustrations including a self-caricature of Verlaine I had never seen) is similarly available here: http://babel.hathitrust.org/cgi/pt?id=mdp.39015033497663;view=1up;seq=70 .

(**) He mentions explicitly two under-the-counter publications, Femmes and Hombres. I've never seen these texts before, but now my curiosity is aroused.

(***) He never rightly understood the world and only knew how to narrate himself.