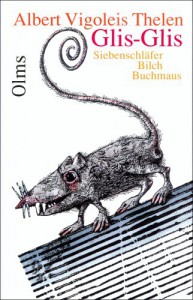 I was eager to regale myself with some more of his writing. Easier said than done. Using the Florida university library loan system, I did get access to a copy of Glis-Glis, which has the subtitles Eine zoo-gnostische Parabel (A Zoo-Gnostic Parable) and Entstanden als Fingerübung eines Seh-Gestörten (Arisen as Finger Exercise of a Visually Disturbed Person). As is clear already in these titles, Thelen plans to continue his masterful word games in this brief text.

What Thelen offers the reader is a very digressive, ironic parable about a fairy tale which becomes The Book of Books (unmistakably modeled on the Bible), about its Maker (unmistakably modeled on the Christian God), and about the less than happy consequences for mankind, which, by a slippery series of word associations, is called glis-glis, glis esculentus , and a near infinite list of names ending with "mouse", for the essence of the "little animal" (mankind) is Nagen (gnawing). After that, no small number of other rodents come into play. And play it is; I had to laugh.

Stylistically, Thelen indulges in word play of every kind, including one not so often employed in Insel : an aural word play in which not the meaning but the sound of the words is the toy. My impression is that he uses this not only because it gives him pleasure, but also to further deflate above-mentioned objects which are ordinarily taken excruciatingly seriously. He also gives us sentences which constantly negate themselves, which twist back upon themselves and deny, negate, deflate everything said before, leaving little standing in each paragraph-long sentence. And then come a few relatively straight paragraphs, particularly when he is giving a zoologist's precise description of rodents... From a rodent which hibernates seven months of the year to legends of hibernating humans to insomnia and back to rodents. You get the picture - none of it is serious.This text is a fairly enjoyable jeu d'esprit which offers little to gnaw on.