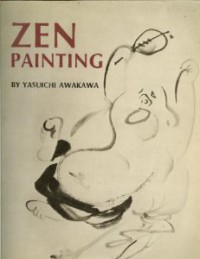 Zen Painting (published in 1970) claims to be the first book to treat Zen painting comprehensively as a category of art in its own right (which Awakawa terms Zenga ). Whether that claim is true or not, the book is informative and contains reasonably good reproductions of 135 masterful Chinese and Japanese paintings that are clearly related aesthetically. A good number of the artists were Zen monks themselves, and all paintings are executed in ink and ink wash.

Awakawa only has 30 pages in which to discuss the history and cultural context of a tradition over 1500 years old; needless to say, they are insufficient. But he supplements these with a brief commentary on each painting which provides information about its maker and content. Turning to the 130 pages of generally large reproductions, one finds a more or less chronological presentation beginning with Chinese paintings which were not Zen influenced but which provided later Zenga artists with important technical devices. A lovely example:

The brushwork style of this and other paintings by Liang later came to be termed gempitsu (few brushstrokes) by the Japanese and was very influential in Zenga.

(Mu Ch'i - late 13th Century). In addition to still lifes, the tradition included portraits, primarily of significant Zen masters (which shared many commonalities with the Tao tradition of "crazy masters") and landscapes

(Sesshu Toyo - 1420 - 1506) which suggest the landscape more than portray it. This tendency towards bold abstraction developed further:

(Torei Enji - 1721 - 1792) Note the dates! Abstract art in the West was at least a century behind Zenga. I have only selected a few examples (all of which are to be found in Zen Painting  ) to illustrate some aspects of this tradition, but there is much more to it. For example, the wry and eccentric humor which is part of both the Zen and Tao traditions is also to be seen in this book. I recommend it.