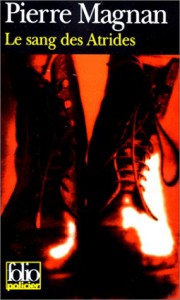 Le sang des Atrides (1977) was Pierre Magnan's (1922-2012) breakthrough book, winning the Prix du Quai des Orfèvres and initiating a successful crime/mystery series centered upon Monsieur le Commissaire Laviolette. When I read a book like this, besides looking for a good story, I hope to find that the author can take me into a milieu I have little experience with; this is one of the reasons why I rarely read such a book now if it is set in the USA or Britain. And as the conventions established by 19th century realism are generally accepted in this genre, I generally expect to find believable characters and a case/investigation which does not require any miracles. Duly delivered here (*) with a certain humor. The old stories of the family of Atreus have distantly influenced this story, hence the title.

This book is set in the small town of Digne in the Haute-Provence (or Basses-Alpes), where Laviolette has been banished for offending a powerful politician and where he and an investigating judge, also banned to Digne for having the wrong political opinions, must deal with very provincial officials and rather eccentric inhabitants. So far, so good.

My favorite, contemporary, European crime series, Henning Mankell's Wallander and Andrea Camilleri's Montalbano, have in common that the reader becomes intimately familiar with every aspect of the investigator's life and thoughts (the former is a self-lacerating depressive and the latter is an authority-rejecting bon vivant ).

Not so in this book. This is all business. Except for an excellent, lengthy set piece in Madame La Chevalière de Champclos's mind (Chapter 8, for my future reference :) ) and a rather less impressive encounter between the judge and the chevalière's granddaughter, the characters are presented from the exterior and only in connection with the investigation. Moreover, in this set piece Magnan's prose changes texture and intensity in a way that increases my regret that he didn't write the entire book so. Magnan wrote more than 30 books; did he write one of them solely at this very gratifying level of prose style? If so, I want to read it.

But this is not that book. One extra star for Chapter 8.

(*) Or nearly, for I found the little girl's final scene flatly incredible.