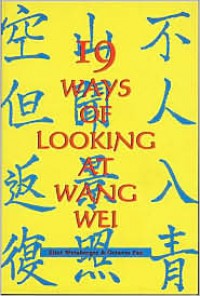 In this book Eliot Weinberger examines the difficulties inherent in translating classic Chinese poetry into Western languages by considering a special case in detail: he selects one poem by Wang Wei (699/701 - 761), romanizes it, gives a literal translation and then considers 16 different translators' versions of the poem in English, French and Spanish. In my review

of a book of translations of Wang's poetry I discuss some of the difficulties one necessarily encounters in such translations and why I enjoy reading them nonetheless.

One should keep in mind that, in choosing this poem by Wang Wei, entitled "Deer Park" or "Deer Grove", Weinberger deliberately selected an example towards the difficult end of the scale (though certainly not one of the most difficult), and one which is of sufficient significance to have merited many translations. The poem is a shih consisting of four lines of five characters each. In Chinese Lyricism , which I review here

Burton Watson examines the same poem in some detail, providing another (not identical) character by character literal translation. Some of the differences between the two are of the type "man" vs. "people,person" and "wood" vs. "forest", but Weinberger indicates, in addition, that the same character can be read in different ways depending on context, and when the context is not determinant, then the ambiguity remains. One must assume that an accomplished poet like Wang intended that ambiguity to enrich the meaning of the poem (or perhaps he felt that the context was, in fact, determinant). As an example, for the second character in the third line, Watson gives "light" while Weinberger gives "bright(ness)/shadows". Weinberger does note that Francois Cheng points out that the first two characters of that line form a classic trope for "rays of sunset", and it is in this meaning that Watson and most of the others translate those two characters.

Here is Watson's literal translation of the poem:


Upon the reports of the knowledgeable, in Chinese this poem is vigorous and engaging. This literal translation is, well, pathetic. It is necessary to clothe this skeleton with some flesh in order to present it as a poem in English, or any other Western language. And here you see part of what I meant when I wrote in another review

"The aim in using the concept and association agglomerations indicated by the "pure" noun, verb, and attribute characters was to invite the reader to use his imagination/literary and cultural experience to take a walk on his own in a setting proposed by the author in the poem. This goes beyond the usual "much is left unsaid or implied" (which is certainly also at hand); in such poetry the reader is expected to be active in a manner which goes well beyond the "deciphering of meaning" familiar to readers of Western poetry."

Wang deliberately left aside all the extensions Chinese has at its disposal to specify, to make precise what is meant.

Weinberger then gives us 16 fleshed out versions of this poem by different translators, two of which are in French and one in Spanish by Octavio Paz (who also contributes a little essay), providing each with rather apt commentary. He certainly was not shy about expressing his negative feelings about some of them. The translations are presented chronologically from 1919 till 1978.(*) I find it to be very illuminating to have all these different versions side by side.

Here are my two favorites from this book, the first by the scholar, Burton Watson.


Empty hills, no one in sight,
only the sound of someone talking;
late sunlight enters the deep wood,
shining over the green moss again.


The second is by the American poet, Gary Snyder.


Empty mountains:
no one to be seen.
Yet - hear -
human sound and echoes.
Returning sunlight
enters the dark woods;
Again shining
on the green moss, above.


In the end, personal opinion will determine which translation one prefers, where on the scale between "true to the author" and "true to the poetics of the host language" one comes down. Perhaps you will find, as I have over the years, that to have more than one perceptive reading of the same poem is a good thing, and not confusing at all. And, finally, as Weinberger writes:


As such, every reading of every poem, regardless of language, is an act of translation: translation into the reader's intellectual and emotional life.


(*) I have some more recent translations of the same poem by David Hinton and others, so this poem is still exerting a strong attraction.