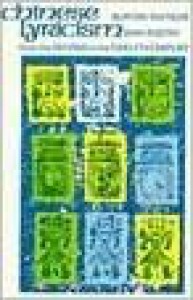 Translations are problematic in general, and translations of classical Chinese poetry are particularly difficult (I discuss some of the reasons for this in my review of a book of translations of some of Wang Wei's poems:

I also explain there why I feel it is still worthwhile to read such translations.) But there is another consideration of note, which, I think, may contribute (along with the significant differences in cultural context and assumptions) to the repeated use of words like "flat" and "boring" by many GR reviewers in reference to the great Chinese lyricists. Although I have read that Chinese admits, where necessary for precision (after all, governing a huge empire for centuries does require precision at times), extensions to indicate number, tense, mood, etc., I have also read that in much of classical poetry the authors deliberately neglected such extensions. The aim in using the concept and association agglomerations indicated by the "pure" noun, verb, attribute characters was to invite the reader to use his imagination/literary and cultural experience to take a walk on his own in a setting proposed by the author in the poem. This goes beyond the usual "much is left unsaid or implied" (which is certainly also at hand); in such poetry the reader is expected to be active in a manner which goes well beyond the "deciphering of meaning" familiar to readers of Western poetry. (This is not to say that readers of Western poetry do not, on their own, take such walks, inspired by the poem they have just read. I know I take such perambulations through the associations/emotions/memories/etc. the finest Western poetry generates.) So, already for purely grammatical/semantic reasons, a translation of such a Chinese poem into a Western language is a proposal for one of the many possible walks the original leaves open; in other words, any translation into a Western language is necessarily limiting, against the intention of the author of the poem. (This is all well illustrated in Eliot Weinberger's 19 Ways of Looking at Wang Wei , which I review here

I have read Burton Watson's Chinese Lyricism (1971), with the subtitle Shih Poetry From the Second to the Twelfth Century , as another step along the path to obtain a clearer glimpse behind the curtain set up by the process of translation from Chinese to English. As I understand it, the word shih is often used to mean poetry in general, but it also refers to a particular lyric form going back to the very first collection of Chinese poetry, the Shih-ching ( Book of Songs , sometimes also called the Book of Odes ) which was assembled around 600 BCE and contains poems and songs dating from the 11th to 7th centuries BCE.

Watson's book is not a systematic or comprehensive history of the shih form. As he writes


Instead it has been my aim to present groups of poems, arranged, except for minor departures, in chronological order, that seem to me to illustrate the most important formal, stylistic, and thematic developments in its long process of growth.


To this end, Watson gives us translations of approximately 200 poems accompanied by lengthy commentary.

Together, these translations and this commentary have cleared up a great deal in my understanding of classic Chinese poetics. There is so much information in this relatively slender volume that I cannot possibly indicate its richness within the bounds of this review. I'll only mention a few points more or less at random.

It is of interest to note that the poems were written in classical Chinese, the Chinese of the Han dynasty (206 BCE - 220 CE), even though, as time passed, the distance between the quotidian Chinese and the classical Chinese grew larger and larger. That is not to say, however, that there was no evolution in the literary language. Indeed, as Watson writes, "Poetry in particular, presumably because of its close affinity with song, often borrowed phrases and turns of speech from the vernacular, and showed itself bolder and more experimental in its modes of expression than the prose tradition." But, nonetheless, one must imagine a contemporary English-language poet writing in the style of Spencer, or even Chaucer!

Of further interest to me is the information about the evolution of the tones(*) used in the Chinese language Watson offers in this book. For example, from the 5th century on the tones were recognized as an important element in Chinese prosody, and the tones used during the T'ang dynasty are definitely different than those used today (just as one knows that the sounds of vowels in the English used in the Elizabethan Age are definitely not those used today in the many, many dialects of English). So modern Chinese readers sounding out classical Chinese poetry are mispronouncing the poems, just as we do when we read Shakespeare or Donne aloud.

Those of you who have read my review of Eliot Weinberger's 19 Ways of Looking at Wang Wei , or the book itself, may be interested to know that Watson suggests an interpretation of the sole poem treated in that book which is compelling and which truly heightens my appreciation of "Deer Park", a poem I had thought decomposed into two fairly unrelated pairs of lines. Not at all! I fear that, as much as I already admire Wang's poems, I've yet only scratched the surface of their content...

I would like to close by citing one of the translations Watson gives us, this one the opening lines of a poem by Tso Ssu (fl. 300 CE):


Does this cut a bit close to the quick for anyone else? I strongly recommend this fine little book.

(*) Chinese, like Thai, Lao and Vietnamese, is a tonal language, so that the syllable "shih" pronounced with different tones has completely different meanings.