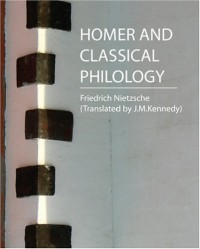 Homer und die klassische Philologie is Friedrich Nietzsche's 1869 Antrittsvorlesung (inaugural address) at the University of Basel. In the tradition of German language universities, a newly installed professor gives a public address to introduce some aspect of his work and thus himself professionally. This is a moment of triumph, but also a moment of possible considerable embarrassment.

Nietzsche's Professur was in classical philology, and in a beautifully written lecture Nietzsche first gives an overview of his field, while indicating problems intrinsic in the field and criticisms of the field made by outsiders. He hastens to deflect these criticisms(*) and tries to illustrate how the inherently disparate tendencies within the field could possibly be transcended by considering a concrete example: the "Homer question". Was Homer a person and the author of "his" works", or are his works the result of a kind of historically contingent collaboration of many? Or are they the result of some mystical Race Soul?

He analyzes the various theories and concludes the following: In the preliterate age in which the Homeric epics were conceived, developed and passed down orally, "Homer" entered the ranks of names like Orpheus, Eumolpus, Daedalus, Olympus - mythical inventors of various branches of art. But there was an individual who first conceived the Iliad and the Odyssey whose name was lost, sacrificed to the mythical initiator, Homer.

He ends with an eloquent rhetorical flourish which surely impressed the listeners.

The original can be read here:

while a fairly adequate translation into English can be read here:

(*) Though he himself was already extremely critical of the field, he, for obvious reasons, largely suppresses this criticism here. Only a hint of it surfaces in this lecture.