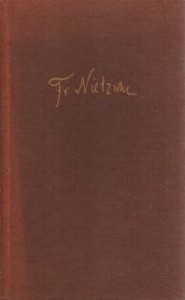 Der ängstliche Adler (1980) is a thorough, detailed, small type-faced, 800 page biography of Friedrich Nietzsche (1844-1900), the German romantic philosopher who wanted to be the prophet of a total revolution of mankind's political, social, intellectual, artistic and personal life. As is known, some extremely unpleasant people co-opted some of his ideas in just such a revolution, a revolution that resulted in many tens of millions of deaths and the worst armed conflagration in mankind's sorry history. However, they didn't need Nietzsche's fig leaf to carry out their purpose; his writings were an epiphenomenon of a certain current of thought, no, more like feeling, that has been with us at least since the Industrial Revolution and haunts us still.(*)

As I expected, the young Nietzsche was completely suffused with romanticism from the very beginning; he wrote poetry, prose and music from the age of ten or eleven; he indulged his family and friends in piano improvisations, basking in their admiration in a pose of artistic inspiration; he loved/feared violent storms, wild forests and raging rivers. The world conflagration in the Edda was "the most grandiose invention the genius of man ever conceived" (translated from the writings of the teenager). He devoured Byron, Hölderlin, Hoffmann, Shelley and Jean Paul. No surprises there, except perhaps how seriously he took his music. He wrote large scale works such as a symphony and a mass, but since he never learned such basic skills as counterpoint, it is probably best that I haven't heard them...(**)

What I did not expect, however, was the news that his father and almost all of his male relatives were pastors of some kind, and that he himself was, at least on the exterior, deeply religious and thoroughly obedient and conformist into his early 20's! What transformed him into the vitriol spewing rejecter of Christianity and all bourgeois values?

Ross locates the first causes in his reading Shelley and Byron (in translation), in the influence of one of his teachers, and in the fact that he transferred the critical methods of examination of ancient Greco-Roman texts taught in his humanistic Gymnasium(***) to the Bible. As much as he loved Shelley's "Prometheus Unbound", Byron's "Manfred" exercised an even stronger attraction on him. He was not the only young romantic to be lured to the "dark side" by these poets...

Ross finds the following sentence in the writings of the not quite 18 year old:


(However, as soon as it would be possible to overthrow the world's entire past through a strong will, we would immediately join the ranks of the independent gods.)

This would be yet another gaseous emanation typical of many teenage boys under the influence of the named poets, except that one recognizes here a central leitmotiv of Nietzsche's lifework. Remarkable. The man basically remained true to this aspect of his youthful naïveté his entire adult life! But, as yet, he was just trying on poses, oscillating between extremes, trying to find himself, like all teenagers. Another consequence of his readings: his writing became eloquent in the florid romantic style - again a trait of the adult Nietzsche.

Nietzsche studied classical philology at the universities of Bonn and Leipzig. In Bonn he joined the Frankonia Burschenschaft (something like a fraternity, but with fencing with naked sabers thrown in), so there was precious little studying and vast amounts of drinking and drunken pranks. After a year, he moved to Leipzig and studied with Friedrich Ritschl seriously for two years. Nietzsche impressed Ritschl, and with Ritschl's active help he notched up some papers published in a professional periodical Ritschl edited, as well as a prize from the university. But he was already aware that the work did not really appeal to him; what he liked was the "success" - the recognition by others and the bandying about of the word "genius" in connection with his name. At the same time he was quite consciously developing a nonacademic prose style.

With Ritschl's help he started an academic career at the University of Basel ( without writing a dissertation or habilitation!), which did not last long, as I explain in my review of his first book:

That was for the best, because he was completely unsuited to academic endeavor. He resisted systematic study and thought. His failure in mathematics at the Gymnasium nearly prevented his graduation, and he knew next to nothing about the natural sciences. Even his love of music could not provide sufficient motivation to learn the basic tools of the trade like counterpoint. He did not read philosophy systematically, and when he fell in love with Schopenhauer it was not so much with Schopenhauer's philosophy as with his style and pose, his biting rejection of nearly every aspect of then contemporary life.

And when he read Geschichte des Materialismus by a certain Friedrich Albert Lange, he was confirmed in his path. Lange took Kant's skepticism and drew the boundaries of "knowledge" even more tightly than Kant did, so tightly that precious little was left inside. That was exactly what Nietzsche wanted to hear - if almost nothing can be known for certain, then knowledge need not be a concern.(****) And therefore philosophy cannot be considered a body of knowledge, but rather a branch of literature. So good philosophy, similar to literature, provides pleasure, invigorates and instructs morally, and, in Nietzsche's hands, motivates to a complete overthrow of the existing structures to benefit the few human beings who merit the designation. Of course, Nietzsche was one of the few...

Ross goes on to provide a detailed description of the rest of Nietzsche's fascinating, but sad and short life (I'll be mentioning bits of this in upcoming reviews of some of his more significant works); short, because already in 1888 he had the first really serious bout of madness, the symptoms of which had earlier become increasingly insistent and took over completely in 1889. He was subsequently placed in a mental institution and died 11 years later without recovering himself.

Here is a report from one of his closest friends, Erwin Rohde, written after a meeting with Nietzsche in 1886.


(An indescribable atmosphere of strangeness, something which completely unnerved me, surrounded him. There was something in him which I never knew before, and much was missing which once distinguished him. As if he came from a land where no one else lives.)

What was the cause of Nietzsche's madness? When I first occupied myself with Nietzsche long ago, the received wisdom was madness in consequence of tertiary syphilis. Ross examined the matter very carefully and found that his family was not as healthy as his sister Elizabeth portrayed it in her hagiography/biography of her brother. Among other things, his father died at the age of 36 of some kind of unspecified brain disorder and manifested many of the same symptoms as Friedrich did later. From an early age Friedrich Nietzsche suffered from terrible migraines and stomach problems, as well as inheriting his father's extremely poor eyesight. Nietzsche repeatedly manifested his fear that he had inherited his father's problem, which he himself interpreted as a madness. When he survived the age of 36, Nietzsche was relieved, even though he could barely see or walk and was still plagued by migraines and spells of depression; however, that relief was short lived. He ended his days believing himself to be God, at least until he slid into some kind of final catatonic state.

This book is beautifully written and richly evokes the many different settings and milieus Nietzsche found himself in. One has no need of historical novels when there are splendid biographies like this one. I recommend this book, but, unfortunately, there appears to be no translation into English or French available.

(*) What is more, they conveniently overlooked the fact that Nietzsche repeatedly warned the Germans after the Franco-Prussian War of 1870 that they would regret their victory, because, as he expected, the joyous delirium and pride of easy victory (1) enabled the oppressive Prussian government to extend and strengthen its control both geographically and culturally and (2) prepared a mindset that would inevitably lead to another war. Moreover, they ignored the fact that Nietzsche execrated the Second German Empire and lived in Switzerland and Italy for the rest of his sane life. But facts are irrelevant to politics, then as now.

(**) I was surprised to find that many of his compositions were published after his death. You can download the scores of some of the smaller pieces for free here:

you will find a performance of one of his pieces. Here

are excerpts from a CD's worth of his compositions! They aren't bad, just very earnest and a little clumsy.

(***) That means that the main emphasis was on learning Greek, Latin, and the Greco-Roman literature inside out, along with Christian theology. That was also fairly typical of the better British "public schools" at the time. Another parallel: Nietzsche's school wasn't in his hometown; he, along with most of the students, were boarders, so the teachers and his classmates became his primary influences.

(****) For an early formulation of this extreme skepticism, which approaches nihilism in Nietzsche's hands, see his Über Wahrheit Und Lüge Im Außermoralischen Sinne, which I review here: