The Pure and the Impure , by Colette 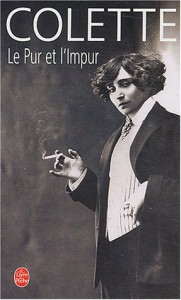 I've just finished re-reading the only book of Colette I have ever read. When I first read it, so many years ago, my French was not up to the challenge - fortunately, that is no longer the case.

It is evident from the earlier reviews (in GoodReads) that this book is many things to many people - indeed, I find when reading some of the earlier comments that I must remind myself that we are all talking about the same book, for it is certainly not evident.

To me, it is a collection of relatively brief portraits, usually emphasizing just one aspect of the person's character: the middle-aged woman with the lover over 20 years her junior; the past-middle-aged cockhound; the truly ruthless Don Juan; the lesbian poet who excels in every form of eccentric extravagance (and who is dead at 32); the aged and querulous lesbian actress; the Georgian lesbian couple in their bucolic Welsh cottage; a band of dishing queens from whom only two emerged as individuals - a man in his 70's who lives with his centenarian mother (!) and a crossdressing 17 year old butcher's apprentice, who, according to our author, shot himself in the face a few days after his somewhat less than successful appearance at her salon (!). These very partial portraits are drawn with great precision, if not subtlety, in a language often enjoyable to read; they merit savoring. The portraits are leavened with some rather airy, bordering on empty, theorizing about the differences between male-female and female-female relationships. Mildly irritating is her occasional tone of worldly grande dame observing the natives in their habitat (unhappily, she actually begins the book in this stance); much more irritating to me are her occasional generalizations (and not just in the reported conversations, but also in the narrator's voice) signaled by "toutes les femmes", "les hommes" and the like. And I wonder how many lesbians would agree that "only sapphic [my emphasis] libertinism is unacceptable" ?

In sum, this book is a unicum - I haven't read anything else like it. But I expect this will be the last time I read it...