Dawn to the West , by Donald Keene 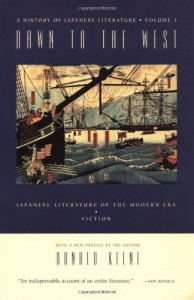 Dawn to the West (1998) is the third volume of Donald Keene's (born 1922) masterful tetralogy, A History of Japanese Literature. I review this volume of the series, in particular, because it covers the fiction of the modern era (roughly, after 1850), which appears to be of more interest to the likely readers of this review than the modern poetry and theater or the earlier literature. (*)  Keene deliberately omits contemporary authors, "because of my reluctance to write about living authors whose oeuvres may develop in ways I cannot predict."

In approximately 1,300 pages Keene provides a wonderful overview of modern era fiction, describing the literary movements and associations, some of the cultural, social and historical contexts, delivering critical insights and summaries of works (many of which have still not been translated into a Western language). Keene also treats the reader with translations of passages available nowhere else. Biographical information and a full overview of the literary career are provided in the case of the most important authors. His knowledge of the subject appears encyclopedic, and he writes with grace and verve.

Here is an excerpt from his chapter "The Revival of Writing By Women":

The appearance of Higuchi Ichiyo (**) on the literary scene of the 1890s marked the end of many centuries of silence on the part of prospective women writers, but her success did not immediately precipitate a flood of literature by women. It is true that a few women of the early twentieth century are remembered for a story or a translation, and Yosano Akiko (***) emerged as a poet of exceptional intensity and appeal; but it was not until the 1930s that women began to produce works that both attracted wide public attention and are still read today. This change was due mainly to the effectiveness of the individual writers, but also to the enhanced position of women in Japanese society. A lone woman writer, even one of the obvious talent of Tamura Toshiko (1894-1945), could not singlehandedly combat the "feudalistic" mentality prevalent in the literary world of the late Meiji era; eventually, after several novels of serious intent, Tamura gave up the struggle and turned into a writer of pulp romances.

Here a brief excerpt from the chapter on Kawabata Yasunari:

Kawabata's works are often sensual. This is true of two of his best, Snow Country and Thousand Cranes, but they lack the sense of personal involvement that one expects in sensual writing. Love, for Kawabata, tended to the unattainable, and experience was observed rather than felt.

I have been using Keene's books for quite a while and have found his guidance to be extremely reliable, even if we might differ here and there in matters of personal taste. This tetralogy is a summa of a lifelong dedication to Japanese literature and is a most impressive achievement.