The Loyal Ronins , by Tamenaga Shunsui 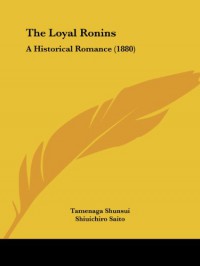 Through the auspices of the State University Library System of Florida, I have in my hands what is probably the first translation into English (at least in America) of a Japanese novel. In 1880, Shiuichiro Saito and Edward Greey published The Loyal Ronins, a "translation" of one of seven monogatari in Tamenaga Shunsui's I-ro-ha Bunko (The A-B-C Writing Desk), itself published in 18 volumes between 1836-1848. Shunsui (1790-1844) was one of the most popular writers in late Edo Japan and one of Nagai Kafu's favorite authors. I'll have something more to say about this translation below, but first to the story.

The tale of the 47 ronin has been told and retold in Japan to the point where there is an entire genre called Chūshingura (the title of the puppet play written in 1748 based upon the events in question, available in a fine translation by Donald Keene) of fictionalizations of the story in literature, theater and film. Briefly, at the end of the 17th century a great lord is offended by a representative of the shogun and wounds him severely with his sword. The shogun, viewing this as an insult to his own authority, orders that the lord commit seppuku, which he does. The great lord's samurai retainers become masterless (ronin) and vow vengeance on the shogun's lackey, who survived his injuries. For years they dissimulate their intent, going to incredible lengths to reduce the lackey's cautious alertness by acting as men who had totally lost their honor, and then finally carry it out. The shogun's representative is butchered. This satisfies their duty to their former lord, but now they have violated their duty to their shogun. All 47 commit seppuku. This story of duty resolutely carried out to the most extreme ends resonates within the core of the Japanese. Needless to say, the militarists who took power in Japan at the end of the 19th century and carried Japan into wars with Russia, China and then the Allied powers played up this story. In 1941 Mizoguchi Kenji made a solemn, hieratic, beautiful film based upon the story which became the hit of wartime Japanese cinema.

The Loyal Ronins is what we now call a historical novel; largely remaining true to the known facts of the situation, Shunsui fleshes out the story with novelistic imagination. I haven't yet read any of the histories written about the incident, nor have I delved into the near boundless genre of Chūshingura to the extent where I can comment upon the differences of interpretation, but I can say that this retelling is most enjoyable. Mid-Tokugawa Japan leaps before one's eyes with strutting samurai, noble lords, suffering peasants, an avaricious quack swindled by an even better con man, and predatory bands of men testing the bounds of power. Both loving, self-sacrificing women and greedy harpies populate the scenes. Shunsui weaves in many characters besides the samurai of the two opposing sides, giving the reader a cross section of Japanese society. More than an involving story of adventure and intrigue, and a portrait of a society, it is also an exemplary and edifying story of duty and loyalty, both in the sense intended (and understood) by the Japanese and in the sense seen by a much different culture, ours: it is an early model of obsessive duty, sacrifice and violence later played out to horrifying effect in the Pacific theater of World War II. One must admit, however, that there is an unmistakable hint of pulpiness to this text; it was definitely written for the growing middle class market in Tokugawa Japan.

As for the translated prose, though it is certainly not rolling Tennysonian thunder, it is late 19th century English, a bit formal and convoluted to our unfortunate, early 21st century ears (even after abstracting the formalizing Japanese original, though Shunsui was writing for a general audience and not for the elite), and all the better for it. On occasion, it is clumsy, and in light of Kafu's admiration of Shunsui's style it is safe to attribute that to the translation.

I wrote "translation" above because the translators felt themselves obliged to interpolate background information about the 47 ronin into Shunsui's text, instead of employing foot- or endnotes. Another unfortunate choice (from my point of view) is to have translated all of the names of places and persons throughout the text, with few exceptions.(*) So, for example, the name Kayei appears as Fortunate-Perpetual! This is nearly the same as replacing "Stephen" with "Crown" or, even better, "Albert" with "Noble-Bright". And it yields sentences like "Sir Reedy-Plain, the chief councillor of Lord Tortoise-Well..." (That strikes me as absurd!) At least they leave a few words like samurai, ronin, sake alone. And in an introduction the translators indicate a choice I heartily approve of: "We have not attempted to translate the quaint sentences into elegant English, but have done our utmost to retain the unique, naive style of the author."

As a side note, the volume I read is not only the first edition, replete with reproductions of the wood cut prints illustrating the original Japanese edition and printed with lovely type on fine paper one never sees any longer,(**) but it is signed and dedicated, in English and Japanese, by Edward Greey. I am so tempted to "lose" this book - in the past 35 years it has been signed out a total of 4 times, including me - but I shall with immense regret dutifully return the book on the very last day of my two month allotment. :(

(*)   The same choice has been made in the quite recent translation of the Chinese Shuihu Zhuan I've been reading. I don't like it - show the meaning of the name once in parentheses or a footnote, and then basta.

(**) How can the alleged convenience of electronic readers even begin to replace the rich pleasures of a fine edition? Of course, the shoddy rubbish produced by publishers currently cannot possibly turn the tide. I may witness the end of the publication of physical books in my lifetime (and I am no youngster).