The Seamstress and the Wind , by César Aira 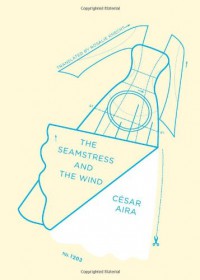 ...it occurs to me that there's something else I could rescue from the ruins of forgetting, and that is forgetting itself. Taking control of forgetting is little more than a gesture, but it would be a gesture consistent with my theory of literature, at least for my disdain for memory as a writer's instrument. Forgetting is richer, freer, more powerful...

The Argentinian César Aira (b. 1949) is a writer I am still trying to locate in my spectrum of likes and dislikes. I read his remarkable An Episode in the Life of a Landscape Painter a few months ago - a unique vision which, finally, was not able to satisfy completely the expectations it fostered, though it has stuck with me like a burr on my sock. I know that I shall have to read that book again.

The Seamstress and the Wind is a very different kind of book; yes, it is brief and extremely self-reflective, but it is also radically self-contradictory in a manner not seen in Episode.

I suppose that in the majority of cases, if not in all of them, we only believe we've forgotten things when actually they had never happened. We haven't forgotten anything. Forgetting is simply a sensation.

Hmmm, what happened to the power? And his disdain for memory as a writer's instrument was waived a few pages later in a long passage of "his" memories as a young boy. Of course, these "memories" were more like dreams, very concrete and realistic for a few sentences, then moving by some private association in Aira's mind to another concrete, realistic stretch, oftentimes contradicting the previous passage. So, not really memories, but something else couched in the trope of memories, though these non-memories do reflect what little I know of Aira's life faithfully enough...

I have always venerated work above all else; work is my god and my universal judge, but I have never worked, because I never needed to, and my passion exempted me from working because of a bad conscience or a fear of what others might say.

Every incident is erected and then dismantled by a series of contradictions. An urgent forced wedding is imposed, a wedding dress is fabricated, the neighborhood is in an uproar, but there is no groom; there is mention of hysterics taking nuptial fantasies for reality, but then, again, it was advisable to pay attention to it because as a general rule that was as right as the truth.

Naturally, a contradiction is central to the book's "plot". First, the narrator's friend appears to vanish during play, then it is the narrator who is alleged to have vanished; but then, again, the disappearance of the friend sends the eponymous heroine off to Patagonia in search of her son, increasingly encumbered by contradictions and qualifying phrases, not to mention an incomplete wedding dress, where she experiences many, shall we say, unlikely events. Among other adventures, a wind sweeps her thousands of feet into the air at "supersonic speed." Of course, she finds herself safely on her feet, unable to explain how. One of many such occurrences.

Unlike the modernists, Aira's contradictions and qualifications do not try to make epistemological, metaphysical, psychological points - they appear to be entirely whimsical, as are the "events" and "explanations" which arise and the insertions of the author's thoughts and observations as he writes the book on café terraces in Paris. These latter, too, largely dissolve into a mist of contradictions. Aira claims that it is a point of pride that he does not plan or re-write, that he writes himself out of the dead ends he wrote himself into rather than revise.

It's as if everything had already happened. And, in fact, it did all happen; but at the same time it's as if it hadn't happened, as if it were happening now. Which is to say, as if nothing had happened.

This is a game of permutations... Little is left standing other than the author's companionable voice, murmuring pleasant nonsense into your ear. This one is not going to stick to my socks.