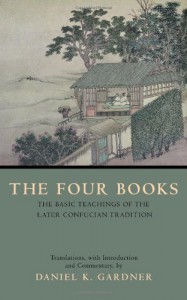 Three crucial components of Chinese culture are Confucianism, Daoism and Buddhism, and I believe Chinese intellectual history can be usefully understood in terms of the interaction of these very distinct systems of ideas and values. Confucianism and Daoism are almost equally old, while Buddhism is a relative youngster. Moreover, Buddhism was a foreign import, though in the hands of the Chinese Buddhism was transformed in new and very interesting ways far away from its Indian roots. At times these three currents within Chinese culture coexisted peacefully, but at other times one would strive for absolute hegemony. Of course, the struggle was not between the systems of thought; it was between representatives of those systems vying for power. I've not yet run across the kind of large scale massacres, stake-burnings and sonstige wars of the kind which grace the history of competing systems of ideas and values in Europe (excepting the rise in the mid-20th century of the Communists, who were importing another foreign system), but there certainly were significant flexings of power to the extreme disadvantage of the rivals.

In the Early Han (206 BCE - 9 CE) the political and social significance of Confucianism was codified by the selection of the Five Classics associated with Confucius (551 - 479 BCE) as the curriculum of the newly established Imperial Academy. The mastery of these books was the door into the imperial bureaucracy/elite. With time, more texts were added to the curriculum until, at the beginning of the Song (Sung) dynasty (960-1279) there were thirteen. The relative importance of these texts within the canon also changed over time, so that at the end of Song dynasty Zhu Xi (Chu Hsi) fervently lobbied for making four books central - the Analects, the Mencius, the Great Learning, and Maintaining Perfect Balance.

What Daniel K. Gardner proposes in The Four Books (2007) is translation of excerpts from these books supplemented by commentary from Zhu Xi (1130-1200), who wrote the commentaries on the Four Books which determined how the Chinese elite thought about them for at least six hundred years, and by his own commentary on the text and on Zhu's commentary. Though I read the Analects and the Mencius long ago, Gardner makes the valid point that it is important also to have insight into how the Chinese themselves thought about the books. And precisely that changed with time, with Zhu's commentaries marking a particularly important moment.

Actually, the picture was not that simple. Buddhist thought strongly influenced many of the leading neo-Confucians, and Zhu's thought was not accepted by his contemporaries. With time, however, Zhu and the Four Books became central(*) and Buddhism waned in Chinese society until a revival during the Yuan dynasty (1271-1368).

The Great Learning, and Maintaining Perfect Balance are actually chapters from the Book of Rites, one of the Five Classics. So what is the significance of the reduction from thirteen classics to these four "books"? Any real answer to that question would be very lengthy, so let me mention some of Gardner's observations.

To generalize, the Five Classics illustrate Confucian morality using concrete examples and lessons from history; set out ideal institutions and methods of governance drawn from the past; describe in detail how one should conduct oneself in life's various, objective situations; and prescribe at length the ritualistic practices for maintaining a well ordered society.... The Four Books tend to be less historical, descriptive and concrete; concerned principally with the nature of man, the springs or inner source of his morality, and his relation to the larger cosmos, they are considerably more discursive and abstract than the Five Classics.

Gardner attributes this shift to the general tendency towards the end of the Song dynasty of the elite to turn inwardly due to the general feeling that no outward efforts would be able to implement the reforms necessary to save China from the increasing dangers posed by the "barbarians" of the north until the individuals who would be proposing and carrying out the reforms had reformed themselves. He also points out that this inclination towards prioritizing work on oneself above engagement in society had been prepared by a few centuries' worth of Chinese Buddhist thought... The very men who were railing against Buddhist thought and attitudes were already saturated with them.

Now, what of the texts and the commented commentary? There is, of course, the interest inherent in viewing the texts and commentary that shaped the attitudes and thought of generations of our fellow human beings, but, as mentioned above, these texts are quite generally philosophical in nature, and Zhu's commentary is the result of decades of philosophical intercourse with the texts.(**) So, although the form and categories differ somewhat from the Western philosophical tradition, the same deep questions are being wrestled with. And in engaging with these texts one is not only learning some different answers to these questions(***) (and seeing some familiar answers re-appear in a new setting), but one is being stimulated to a re-thinking of one's own positions. This is what is called in the streets a "win-win situation."

I thank my GR friend, Helmut, for drawing this book to my attention, and I recommend his review to those who read German:

(*) Some two centuries later, the Chinese state officially adopted Zhu's views, prioritizing the Four Books and making his commentary required reading for the Imperial exams. His authority became so formidable that a "lost chapter" he "reconstructed" for the Great Learning (itself partly written by Confucius himself) became an accepted part of the canonical text.

(**) In fact, Zhu unfolds in these commentaries a philosophical "system" called Daoxue (learning of the Way) that dominated the Chinese intellectual landscape until the 20th century.