Something Strange Across the River , by Nagai Kafu 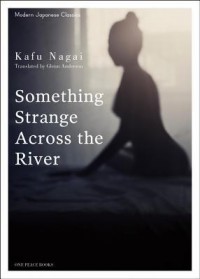 First, a bit of background cribbed from my reviews of some of Kafu's other books.

Nagai Kafu (1879-1959) was in the second generation of Meiji writers behind that of Natsume Soseki. Early in his career he was a member of the Japanese Naturalist movement/school, whose adherents actually adopted only certain relatively superficial characteristics of the French naturalists to their use. Though Kafu initially claimed Zola as his master, he very soon replaced him with Maupassant. Unlike most of the Japanese Naturalists, Kafu learned some French and made a few translations into the Japanese. Of particular note, his father sent his recalcitrant son to the USA to learn how to be a businessman. Not much was learned about business during his four years there, but he did write a book of interesting short stories based on his American experience. He finally talked his father into sending him to France for a year, where he improved his command of French and had no small number of liaisons with the fairer sex (as he had done in the USA). This sojourn also resulted in a bookful of short stories, Amerika monogatari ( American Stories ), which I review here:

Reluctantly back in Japan, Kafu railed against the evolution of Meiji Japan, accusing his homeland both of abandoning its history and culture and of adopting only the worst aspects of the West. At this stage in his life (around 1910) he loved the pre-Meiji Edo culture (when the capital was transferred from Kyoto to Edo early in the Meiji era, the latter was renamed Tokyo, Eastern Capital). Due to the rapid development in Tokyo, Edo Japan could only still be found in the poorer districts, in the Low City, where the artisans, artists and small merchants lived, and in some of the pleasure districts. Kafu set his Japanese fiction almost exclusively in these districts, as well as spent most of his time there, taking endless walks through the smallest streets trying to forget (then) modern Japan and enjoying the attentions of women from the lofty geisha down to the most miserable "working girls". Under parental pressure, he entered an arranged marriage but divorced shortly after his father's death. He didn't let his brief marriage interfere with his pursuits.

Kafu's novella/short novel Sumidagawa ( The River Sumida ) appeared in 1909 with quite a few small works preceding and following it. I review it here:

Bokutō Kitan (called Something Strange Across the River in this translation, but translated by Donald Keene and Edward Seidensticker as A Strange Tale from East of the River ), which appeared in 1937, is again a novella set in Tokyo. However, because of the great Kantō earthquake in 1923, which with the ensuing firestorm destroyed much of Tokyo, there was precious little left of Kafu's beloved Edo Tokyo. Though he had hated Meiji Japan 20 years earlier, his nostalgia for past times now encompassed also Meiji period Tokyo. As Donald Keene put it, "the passage of time and the rapid deterioration of manners had enabled him at last to understand what was unique and genuine in that period." This nostalgia, this longing, and this regret suffuse the text and give it a unique flavor.

The first person narrator doesn't share Nagai's name, but he certainly shares many of his traits and interests. Primary among these are the long walks he takes through the old, run-down neighborhoods far to the east of the Sumida River which weren't destroyed in 1923 and which are experiencing a limited economic revival due to activities of questionable legality. He is looking for inspiration, for a means to finish a novel he is writing and which he sketches and later excerpts for the reader; this is a novel-in-a-novel. Frequently, the narrator pauses to address the reader, to inform why the text before the reader was written and to apologize for being so incapable of properly describing this, that or the other. But there is no overt attempt to distance, to be ironic. On the contrary, every line is so direct, so simple, so disarming.

Both the novel and the novel-in-the-novel are, surprise surprise, about the relationship between a man and a woman, and, in the inimitable Japanese manner, both woman are "working girls," who find themselves rather far down the hierarchy. There is no sign of glamor or allure. These women work out of their homes. The narrator is undisturbed that he must pay for company or that he waits downstairs writing as she "was upstairs with clients". After she became convinced that he was a pornographer (he didn't try to dissuade her), she opened up and "no longer treated me like a simple customer."


When the women who live in the shadows face the men who creep about in the darkness, there is no fear or malice in them, only kindness and love.


The narrator was convinced that Oyuki "could reach into the yawning gaps of time and bring the past back to life." And that was precisely what he needed to quiet his mind. But there was yet another factor:


There was far more joy in discovering a beautifully patterned cloth cast out among the rags than, by analogy, finding stains on a wall that had been declared immaculate.


Another note creeps in: the narrator begins to regret that he cannot take Oyuki into his real life, as she wishes, for a number of reasons, among them being his real life is not the life she thinks it is. This regret, this sense of guilt grows... I'll leave it there.

Nagai's unique, simple and beautiful style is particularly fine in this text. (Special commendation is due to the translator, Glenn Anderson. Another fine translation is in Edward Seidensticker's Kafu the Scribbler

A side note: In 1937, the militarists were firmly in power, and I found quite interesting that in his earlier books Nagai made no mention of police at all (except in America), whereas in this book there are police stands in every neighborhood and intersection, the police are wandering around on foot looking for suspicious behavior, the narrator is questioned because he had a "questionable" purchase on his person, etc.