The Philosophy of Epicurus 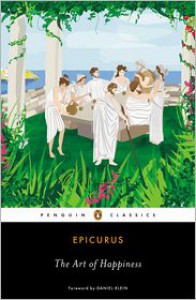 Let me begin by asserting that the equation Epicureanism = Hedonism is absurdly false. I'll elaborate on this below.

Like the works of all of the philosophers who actually initiated and developed Stoicism (lately much on my mind), very little of Epicurus' ( c. 342-270 BCE) prolific writings have come down to us. The editor of this volume, George K. Strodach, claims to have translated everything that remains which is not unintelligibly fragmentary. If true, we have only 3 letters (essays), a collection of sayings and aphorisms called Leading Doctrines, and another incomplete collection of such aphorisms now called the Vatican Sayings.

According to Strodach, Epicurus wrote in a deliberately dry and nonliterary Greek, using technical philosophical terms in an extremely idiosyncratic manner. To supplement the paucity of sources and the uninviting prose of Epicurus, Strodach also brings parallel passages from the great Latin philosophical poem De rerum natura (On the Nature of Things) composed by one of Epicurus' greatest followers, Titus Lucretius Carus (94-55 BCE).(*) Strodach also translates excerpts of that portion of Diogenes Laertius' 2nd century CE compilation Lives of the Philosophers which concerned Epicurus. Along with useful endnotes, Strodach adds a decent 90 page essay on Epicurean philosophy and its antecedents, where he quickly reveals himself to be a committed materialist who particularly admires Democritus' thought and reproaches Epicurus for modifying for the worse his predecessor's system...

Like the founders of Stoicism, and unlike Epictetus, Epicurus begins with physics and metaphysics.(**) One can incompletely summarize his position as a very pure materialism - philosophical materialism, not the "materialism" associated with modern life. In the universe there is only uncreated and indestructible atomic matter in its eternal motions, collisions, adhesions and subsequent dissolutions placed in empty space. Both are infinite in spatial and temporal extent. The only true existents are atomic matter and empty space - all else are more or less temporary manifestations of those two. There is no divine creator or guide. There is a soul, but at death it dissipates into its constituent atoms, so there is no Afterlife, no Heaven, no Hell, and so, as Lucretius explains at length, there is no need to fear death.

This concentrates the mind mightily on the here and now. So, how to live this life in such a universe?

Not as an automaton. Such a rigidly mechanistic and deterministic metaphysics leaves little room for freedom and responsibility, so Epicurus introduced the curious notion of an atomic "swerve" which the "soul" atoms can carry out. It's not clear to me how either freedom or moral responsibility are recovered by this ploy, but I do recognize a deus ex machina when I see one...

Nonetheless, free will and moral responsibility are part of Epicurus' system (as opposed to that of his godfather in physics and metaphysics, Democritus).

Forewarned by reading John M. Cooper's Pursuits of Wisdom, I knew that the commonly parroted view of Epicurus' thought was wrong, but now that I have read the sources which survive I see that he wasn't merely misunderstood, he was deliberately slandered by Christian theologians (and others) in every manner available to them.

It is no wonder that the theists abhorred him - from his follower Lucretius:

I shall account for how men's minds oftentimes hang fearfully in the balance at the sight of what comes to pass on earth and in the sky. Their spirits are demeaned by the dread of the gods and crushed drooping to the dust because their ignorance of natural causes forces them to ascribe all to divine rule and to concede the reign of gods.

The Epicureans wanted to replace divine causes with naturalistic causes, to replace religious superstition with causal chains of natural events, to replace superstitious fear with an understanding much like that of our contemporary scientific community's. Moreover, Epicurus wrote repeatedly that ordinary religion was not just mistaken, it was destructive of mankind's happiness. As Lucretius wrote, "True religion is rather the power to contemplate nature with a mind set at peace."

Although Epicurus' book On the Gods was lost (Diogenes Laertius informs us of its existence in his lengthy essay on Epicurus), it is clear from the bits and pieces that remain that the existence of gods is not denied at all by the Epicureans; but the gods' interest in meddling in the affairs of man and nature is denied, for the gods are complete unto themselves and have no concern for us whatsoever. They could not have an effect on man or nature even if they wanted to.

The role of the gods in Epicurus' system was to serve as exemplars of the highest form of happiness -  ataraxia - a unique state (though it shares certain qualities with satori) which includes serenity, detachment, unadulterated happiness and freedom from irrational fears and anxieties of all sorts as attributes. This happiness has absolutely nothing at all to do with our senses, except insofar as the absence of pain is implied, and therefore Epicureanism has nothing in common with hedonism.(***) It is impossible to misunderstand this from his writings; I speculate that Epicurus was the object of character assassination because his view of the gods was so contrary to that of the Christians and the mystic neo-Platonists that they had to do away with him in any manner available. Diogenes Laertius affirms that other, non-Christian philosophers forged compromising letters they attributed to Epicurus and spread other lies (he even names some names). Stoics and Skeptics attacked versions of "Epicureanism" which had little or nothing to do with his writings.

I now see Epicureanism as a quietistic humanism whose core is understanding natural causes in a mechanistic universe, thereby obviating the necessity of gods and relieving irrational fears and anxieties, and withdrawal within oneself to this remarkable state of ataraxia. The books which explain how to attain this state and how to live with the rest of humanity when one is in this state are gone...

Note: I read the original 1963 version of this book, entitled The Philosophy of Epicurus. Penguin has changed the title and added a forward from a "popular" author for reasons which seem obvious if not quite laudable.

(*) These dates are controversial. One knows almost nothing about Lucretius beyond that which can be deduced from De rerum natura.

(**) His Letter to Herodotus is primarily occupied with the physical and metaphysical setting of his philosophy, where also some arguments are provided for these positions. Passages of De rerum natura which deliver an interesting combination of argument and persuasive imagery give further grounds for thought.