True Story , by Lucian of Samosata 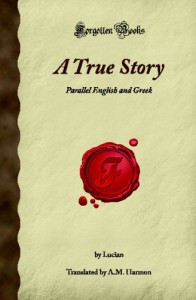 Now, this is what I call a tall story...

Lucian of Samosata (c. 120 - c. 200) was born in the Roman province of Syria. His mother tongue was probably some form of Aramaic, but he wrote his works in a Greek influenced by the Attic classics. He was a rhetorician, a philosopher of sorts and, after the age of approximately 40, a man of letters, writing in a form of his own making - a kind of comedic dialogue meant to be read instead of performed, though he did travel around reading his dialogues to audiences (after all, a man must eat). Lucian had a real interest in philosophy, but the Hermotimos was his farewell to philosophy.

Thereafter, he developed his comedic dialogues and viewed himself as a writer, though many of these dialogues do involve philosophy one way or another. However, he also wrote this story - A True Story - whose truth he flatly denies.

Some fifteen hundred years before Swift, Lucian has his heroes fly to islands in the sky, participate in a war between the inhabitants of the moon and those of the sun, and then get swallowed by a whale who wouldn't even have noticed Jonah's miniscule fishy-wishy.

But then it gets good.

The heroes land at the Isle of the Blessed, where Homer and Ulysses and Achilles live with Socrates and his crowd of beautiful boys. Prominent among the missing: Plato (in his own private Utopia), all of the Stoics (still climbing the mountain of Virtue), all of the Academics (unable to admit the truth of the Isle), etc. Pythagoras and Empedocles are present, though in a rather unfortunate state. Lucian manages to interview Homer, who clears up all of the controversies about Homeric literature...Priceless.

But the heroes had to leave because they were still living. Lucian is not happy about leaving, of course, but he is assured that he will perish soon enough and that, as long as he "abstain[s] from stirring fire with a knife, from lupines and from the society of boys over eighteen" he could expect to return to an honored seat at the banquets on the Isle of the Blessed.

In this inverted Divine Comedy our heroes return to the living but must first pass the isles where the evil are punished. Naturally, they land on one of them, and we are treated to Lucian's version of Hell. Not unexpectedly, the worst torments are reserved for those who lie and who present false histories.(*)

Continuing the long voyage back to Earth, they come to the Isle of Dreams, where Lucian puffs with pride that he can be the first to supplement Homer's vague description with details...  And so it goes, island after improbable island until a storm takes them and dashes them onto a real shore. Ah, but not yet the right shore...

which is available gratis online.]

(*) Earlier in the text Herodotus and a number of the less famous fabulists historians have their legs thoroughly pulled.