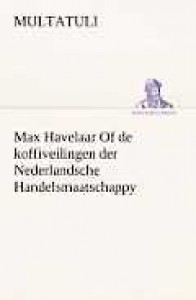 [This book has been translated into many, many languages, including English.]

In the words of J.J. Oversteegen, found in the Afterword of the Dutch edition I read, Max Havelaar (1860 - the uncensored version appeared in 1875) is  "de grootste roman, die ooit in Nederland geschreven is"  (the greatest novel ever written in the Netherlands). As the Afterword is dated 1983 and not 1883, such an assertion is bound to get my attention(*) since I have a high opinion of the work of Nescio and Harry Mulisch and also usually enjoy reading Cees Nooteboom's books. (I review a book of Nescio's here:

Multatuli ("he who has borne much") is the pseudonym of Eduard Douwes Dekker (1820-1887), who for fifteen years worked in Indonesia for the Dutch government until a final conflict of conscience led to his separation from the service. He put those years of experience to excellent use here, but this novel is not just another addition to the literature of the reluctant colonialist.

In the first four chapters of Max Havelaar Douwes Dekker lets the detestable Batavus Droogstoppel (Drystubble), a coffee broker who considers himself to be the salt of the earth and who has smoothly rationalized everything from his cowardice to his parsimony, skewer himself with his own words while setting up the backstory which accounts for the complicated narrative structure of the novel. For the chapters narrated by Mijnheer Droogstoppel are interrupted by chapters told by another narrator, who is supposed to be the result of a collaboration of Droogstoppel's young German apprentice and a down-on-his-luck schoolfriend/author.

This narrator moves the reader from Amsterdam to Indonesia and commences with a detailed description of the political organization of the Dutch East Indies, including a thorough accounting of the situation and duties of an Assistant-Resident. Max Havelaar, the new Assistant-Resident of Lebak  (coincidentally the position held by Douwes Dekker(**)), is introduced, along with other characters in Indonesia. To give you an idea of the wryness of his prose, here is a portion of his description of the Resident:

...he still displayed a calmness, a slowness, and a cautiousness, which would make many a Saurian envious, and which in the eyes of a large number of people are the hallmarks of gentility, of composure, and of wisdom. He was, like most Europeans in India, very pale, which, however, in those regions is in no way considered as evidence of unsatisfactory health, and he had delicate features which bore testimony to some intellectual training. Only there was something cold in his glance, something that reminded one of a table of logarithms, and though in general his appearance was in no way unpleasant or repellent, one could not refrain from the suspicion that his rather large thin nose felt bored in that face where so little happened.

This narrator freely digresses around the mulberry bush and through the woods, including William the Conqueror (!), and if there is a common thread in all of this plenitude it is the excoriation of Dutch officialdom and the Dutch bourgeoisie.  But it is done charmingly, with humor, not with a sneer. Amusing apostrophes to the Reader and an Indonesian love story also break up the seriousness of the proceedings.

For, with occasional interjections from the abominable Droogstoppel,(***) we watch Havelaar's efforts on behalf of the Indonesian people subverted by government officials and profiteers, this despite the official government policy that the Assistant-Residents are there to protect the people against any and all abuse.

And then (one of) the purpose(s) of the curious structure of the narrative comes into play. The two antithetical views of Havelaar are both rejected as partial, and, at the end, Douwes Dekker drops all the masks and directly appeals to the King of the Netherlands to take heed and do something about it.

Although the writer of the Afterword of this edition distanced himself from any judgment concerning the significance of Max Havelaar for the subsequent development of the situation of Indonesia, no less a person than the excellent Indonesian novelist Pramoedya Ananta Toer has written that Max Havelaar is "the book that killed colonialism," at least in Indonesia. Nonetheless, I hasten to reiterate that this book is anything but an artless and humorless political tract. Douwes Dekker has taken his struggles on behalf of the Javanese and his resentments against the comfortably hypocritical and/or opportunistic among his countrymen at home and abroad and has formed a moving, funny, insightful and carefully constructed novel written in a straightforward but pungent language. That it had an impact well beyond literary circles is even more to his credit.

(*) Apparently, the Dutch Maatschappij der Nederlandse Letterkunde (Society of Dutch Literature) proclaimed Multatuli the most important Dutch writer of all time in 2002.

(**) Actually, there are many other coincidences identifying Havelaar directly with Douwes Dekker. In light of the fact that Havelaar is portrayed as well nigh perfect, whose "failings" are generosity and a certain absentmindedness, a reader in our cynical age may well be inclined to wince, though it is possible to attribute this larger than life portrait to the romantic enthusiasm of the young German apprentice.

(***) The use of Droogstoppel is rhetorically masterful, for repulsive as he is, he is not completely repugnant. It is possible for people to see some aspects of themselves in the character. But Droogstoppel is vehemently critical of Havelaar. And he is a complete philistine. So, along with the comic relief Droogstoppel provides, his presence could assure that a certain kind of reader - a reader who might be politically disenchanted with Havelaar but have cultural pretensions - would be more willing to sympathize with Havelaar than otherwise.