The Dwarf , by Cho Se-hui 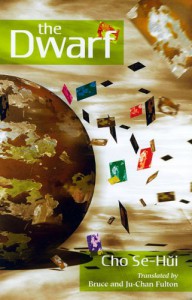 One would not expect a kaleidoscopic, disjointed novel about the tragic lives of society's losers to become a best seller(*) and made into a movie, but precisely that happened to The Dwarf, written by Cho Se-hui (b. 1942) between 1975 and 1978 as a yŏnjak sosŏl (linked narrative), a collection of separately published but interlinked short stories, and accounted to be one of the most important novels of post World War II Korea.

In the 1970's the foundations of the "Asian tiger" of Korea's economy were being laid with little concern for the many small persons whose lives were completely flattened by the steam roller of modern globalized competitive capitalism. Perhaps the next generation benefited from the changes, at least in some sense, but the ruthlessness and the corruption with which this forced economic reform was carried out was particularly startling in Korea.

But there is no attempt to provide the "big picture" in this novel; the reader is shown what those being squeezed to millimeter thickness - the dwarfs of society - experience. It isn't pretty. Nonetheless, The Dwarf is not a lugubrious tract full of deadly earnestness, because Cho's empathy for his many and varied characters makes them come alive and Cho relates their stories with a flexibly changing, ironic tone not to be found in most muckraking books. Some of the characters are members of the privileged class; one of these, a rudderless son of an ambitious father, takes on three dimensions as well. I even felt for the father, until he beat his son with a steel cable because he didn't get the right score on his university qualifying exam...

There is no doubt, however, that muck is raked in this book. There are detailed passages on working in factories on the Ungang peninsula, where the wealth for the Seoul plutocrats was produced and where the air and water were so polluted that the life expectancy abruptly plummeted. Cho contrasts this with the life in the gated, guarded and serene communities in the Seoul hills where the plutocrats' families lived in comfort, health and safety. Same ol', same ol'...  Now all of this is taking place in India and China.

The Dwarf is a thoughtful, insightful piece of social criticism enlivened, I re-emphasize,  by convincing characters in real situations - I could not avoid comparing this text with Balzac's books.

Of the stack of Greek, Thai and Korean books I have been reading in the past few months, this is the first to present a non-straightforward narrative structure, but as this is also the first yŏnjak sosŏl I've read, I have no idea what is standard to the genre and what is unique to this text. In each of the different segments (short stories?) of the book one character's thoughts are privileged, and various characters reappear in the segments of some of the others, the eponymous dwarf appearing in nearly every segment; the segments are also not presented in chronological order. These two fracturing and reshuffling components compel the reader to actively organize the stories into a more or less coherent whole - a well known device from modernist texts, of course, but again I am unclear about how much is modernist influence and how much is an inherent convention of the yŏnjak sosŏl  genre.