The World of Odysseus , by Moses I. Finley 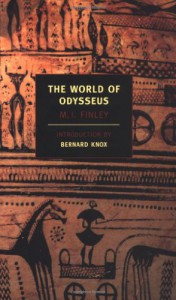 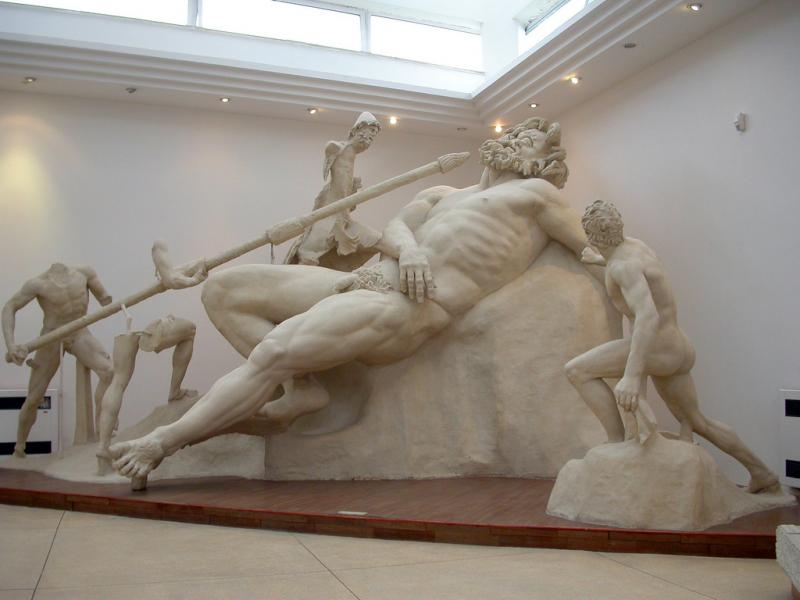 The Blinding of Polyphemus

Just before he ran afoul of the Communist witch hunt in 1954, was fired from Rutgers and ended up a knighted Master of a college at Cambridge University,  Moses I. Finley (1912-1986) published this little gem. Since he wrote this for a non-academic audience (it was first published by Viking Press), he does not argue, cite or support at length - he just describes the world of Odysseus in the light of archaeological, philological and other data known up to 1954, relying heavily on a close reading of the Odyssey.

I emphasize that Finley discusses the Odyssey not as a literary text so much as a historical text, and not as a history of some "Trojan War" (this notion, and the notion that Schliemann's Troy was the Troy of the Iliad, he deflates quickly) but as a social history of a particular moment on the peninsula we now call Greece. The first historical task is to determine the time.

Finley locates the actual time - as opposed to the represented time - of "Odysseus' world" not where I had naively accepted it to be; the received notion from such sources as Herodotus set the Homeric poems in Mycenaean times (12th - 14th century BCE).(*) According to Finley, the Odyssey was written in the 7th century BCE, a little less than a century after the Iliad was written, and the world it describes is not really the relatively distant past as the text pretends, but is primarily that of the 9th and 10th centuries BCE with anachronistic admixtures from both before and after that time.

After explaining the craft of the bards from whose oral tradition the Homeric poets selected and sewed together various pieces, Finley briefly points out the elements of the Homeric text(s) which stem from the standard tools of this craft. But he also points out that it is the art of the selection and the sewing together of the disparate pieces which set the Iliad and the Odyssey apart from the other epic poems of the time. And here I mean not the work of Hesiod, but of five other lengthy epics written down around the same time which survived for at least five more centuries (they were in Alexandria's fabled library) but later disappeared except for remnants in anthologies or quotations appearing in other books.

Finley attributes the survival of the Iliad and the Odyssey precisely to their quality. He reminds us that as the reed paper and skins on which the texts were written decayed with time, it was necessary for someone to care enough about the texts to re-write them by hand. In hoards of Greek manuscripts found preserved in the Egyptian desert a large percentage of the (incomplete due to imperfect preservation) texts were copies of the Iliad and the Odyssey. Many centuries after Homer's time, if one collected ancient Greek texts one was sure to want a copy of those two but rarely the other five.

What about the texts we actually have? According to Finley, the oldest complete texts of the Odyssey we possess date to the 10th century CE. In what relation do they stand to the 7th century BCE text? As mentioned, many fragments of Homer have been found in Egyptian hoards, and the corresponding passages in the monastery texts coincide remarkably well with these old fragments, some of which date back to the 3rd century BCE. OK, that leaves a gap of some 400 years. It appears that internal philological evidence strongly suggests that the text in our possession was established in Athens between 560 and 527 BCE. But Finley assures us that because all Greeks knew Homer's stories well, this Athenian text could not have differed markedly from the original(s) and still survived. So we have some reason to believe that the text that has come down to us closely corresponds to "Homer" 's, and therefore is reporting on customs, social structures, values, religious beliefs, etc. as would a man of the 7th century BCE who is trying to present a somewhat earlier world with convincing detail but incomplete knowledge, with the knowledge of tradition.(**) He must, therefore, fill the many gaps with details from his own world.

So on this basis Finley reads from the Odyssey these customs, etc. and gives us a surprisingly detailed and complete view of the warrior society which was pre-Archaic Greece. Interesting indeed are the many differences and similarities with the earlier Mycenaean age and the later Classical age.

For example, in this "time of Odysseus" the basic social and economic unit is the oikos; this consists of a father, his wife, all of their sons and their spouses and children, if any, all of their unmarried daughters, their slaves and free retainers.  The sons did not establish independent households until their father's death. The oikos acted as a unit with the father acting as basileus (the same term used for kings). All of the goods of the oikos were kept and distributed centrally. The larger social structures were informal and loose. The local oikoi collaborated when necessary in an agora (which meant meeting/meeting place then, not marketplace as it did later - there were no marketplaces in "Odysseus' time" and merchants were despised) led by the "noblemen," a strictly hereditary class. The king was the "first among equals" in this local class (kings there were aplenty in Greek-speaking lands at this time) and was often enough replaced by force. That the king's son would become king at his father's death was by no means assured.(***) "Justice" was either obtained by the offended oikos through its own action or not at all.

This loose social structure and the near total lack of value set in the notion of community, as opposed to honor, renown, and respect of the individual, contrasts mightily both with the Mycenaean palace states and the later classical polis and is just one example of many unique aspects of Dark Age Greece that Finley finds through a close reading of the Homeric texts.

I know that I will have to re-read the Homeric poems with this new perspective, for when I first read them long ago I read them as great stories, well told, and not as expressions of the values of a society which was, let's face it, quite alien to the globalized mass-mediaized mercantile society we now live in, where the highest values are wealth, celebrity, comfort and safety.

(*) One of the few supporting points Finley does mention is that prior to the mysterious Catastrophe that wiped out much of eastern Mediterranean culture during the 12th century BCE, warfare in the region was carried out by vast arrays of chariots with infantry used only as screens. In the Iliad the chariots are used only to transport the heroes to the battlefield, where they dismounted and fought on foot. A complete anachronism if the battle is set in Asia Minor before 1200 BCE.

(**) Unwritten traditions change over time under various social pressures, which is probably the mechanism behind Finley's observation that the actual time of the Homeric poems is only a century or two preceding their inscription onto paper.

(***) Of course, this is the motive behind the actions of the 108 suitors of Odysseus' wife, Penelope; although Finley is uncertain why the agora did not simply choose a replacement for Odysseus, the intent of each of the suitors is to assure he will be chosen the next King of Ithaca by having the advantage of wedding the former Queen.