The Ethics of Ambiguity , by Simone de Beauvoir 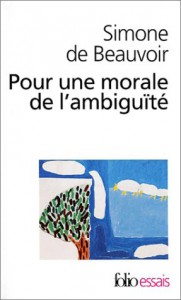 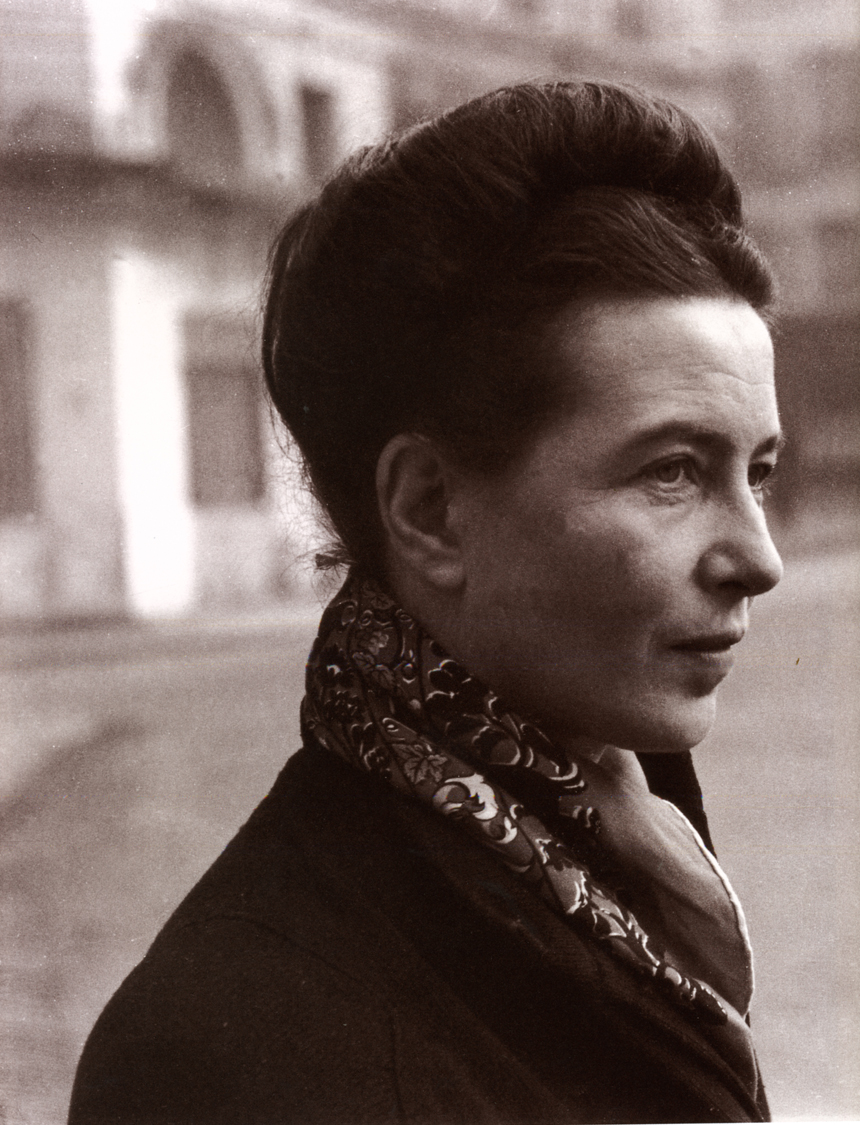 Any philosophical work is an expression of a culture at a particular moment of time as well as of the individual author's personality and experience. The middle class Parisian intellectuals who produced one of the many quite loosely related "Existentialisms" were writing at the end of and immediately following the most widely destructive self-immolation humankind has heretofore wreaked upon itself. As devastating to morale and value systems as the First World War had been, at the end of the Second Europe was lying stunned on its back wondering if anything had any value except possibly naked life itself, that genetically programmed need of all animals to hold onto life.

This is part of the context in which Jean-Paul Sartre, Simone de Beauvoir, Albert Camus and a few others modified earlier ""Existentialisms" to produce an apparently radical sweeping-the-board-clear in an effort initially to focus on the individual stripped of all his bonds to failed societies and discredited value systems. That was just the right moment and place for this effort, and, because it grew out of and expressed a widely shared sentiment, a bowdlerized caricature became quite fashionable for a time (along with goatees and black sweaters).

When I was a very young man who rejected nearly everything his culture and time said was valuable, reading the works of the French Existentialists was exactly what I needed to help me go my own way. Of course, being psychologically and intellectually useful to me and being a coherent, well thought out philosophy are not identical. Which is not to say that I am going to participate in the GR snark directed at existentialism.(**)

No, what I am going to do is review a particularly nice booklength essay by Simone de Beauvoir (1908-1986), Pour une morale de l'ambiguïté - translated into English under the title The Ethics of Ambiguity - which works out the ethical consequences of Sartre's highly metaphysical musings in L’Etre et le Néant.

Sartre's deliberately provocative formula at the top of the review notwithstanding, one of de Beauvoir's purposes in this essay is to explain why despair need not be a consequence of Sartre's metaphysical position. On the contrary - and this is how I received Sartre's message as a young man - it can also lead to a joyful and explorative liberation.

For Sartre and de Beauvoir, it is self-consciousness that distinguishes humankind from all other animals, and it is this self-consciousness, this standing at a pondering distance from both oneself and the rest of existence, that alienates him from himself and all the rest. In certain sects of Buddhism, precisely this self-consciousness is to be discarded as an illusion in favor of returning to the actual: the great sea of being out of which all the "ten thousand things" emerge for a time and then return. For Sartre and de Beauvoir, by contrast, in order to be "authentic," one must "assume," i.e. recognize and accept, this alienation as a basic attribute of humankind. They deny all transcendent entities and values - what is here in this world is all there is, and all values, goals and projects are completely up to us. And precisely because they are up to us and not imposed transcendentally from elsewhere, we, and nothing else, are responsible for what we make of our lives and the world.

But how does one go about choosing these values, goals and projects? Does one follow urges, whims, etc.; does one accept the values, goals and projects of the culture we find ourselves born into; does one do something else altogether, instead? One is free to make one of the first two choices, though it is clear that the philosophers do not approve of thoughtlessly going along with pure contingence; one would, in terms of her quote at the top, have lost the game.

de Beauvoir proposes methods - methods that are largely aimed at benefiting other persons as well as oneself - one can employ to answer the first question; she does not propose rules. And like many of the classical authors' works on ethics, she examines concrete situations. She emphasizes that humankind is always making decisions - also ethical decisions - in a state of incomplete information, so one always risks making a mistake in every choice. That is another basic attribute of humankind one must "assume."

Because every individual has free choice, individuals can make choices that impinge upon the freedom of choice of other persons. When this constraint on one's own freedom reaches a certain point - where this point lies will depend upon the individual - de Beauvoir recognizes the necessity for the individual to remove this constraint by any means necessary, including force. One can hardly wonder, since she had witnessed the rampages of the Nazis, that she explicitly recognizes the moral necessity of war. The liberty of others can turn into a real problem, but that one also must "assume."

Oh how this word "liberty," this freedom to choose and create, must have resonated at the end of the Second World War, and how it did resonate in my young breast much later! By pulling back from the world and one's self-in-the-world through this act of self-consciousness, one finds oneself in the position to formulate both value and the meaning of what one observes. In the words of one of de Beauvoir's striking, though somewhat misleading formulas:

(Liberty is the source whence surges all significations and all values.)

Later in life I learned that the existentialists' works were written in a philosophical context that lessened somewhat the radicality of their vision. The subject-object dichotomy was made the central point of all the German Idealists' metaphysics beginning at least with Kant, and despite the phenomenological aspects of their work, a strong scent of idealism was not to be overlooked in the early and middle periods of Sartre's and de Beauvoir's texts. Nonetheless, they consistently rejected the Idealists' absolutes, both metaphysical and ethical, and tried to work out a way to live with their absence. Despite all the snark I've read, I consider their effort to be admirable.

It is true that the French Existentialists loved their formules, but that is true of nearly every French intellectual I've ever read. It's part of the culture. It's also true that a certain kind of serious play is being carried out in language games like

where de Beauvoir capitalizes upon the fact that in French "être" means "to be","being" in the sense of "entity," and "being" in the metaphysical sense.(***) She is certainly not alone in playing such games. None of this disturbs me, on the contrary, though I acknowledge that it certainly can drive some readers up the wall. Fair warning...

The characteristic feature of all ethics is to consider human life as a game that can be won or lost and to teach man the means of winning.

(**) Which, from what I have read, seems to be directed at the bowdlerized caricature and appears not to be informed by a careful reading of the original texts.

That is to say there would be no "should be" except for a being who, according to the existentialist definition, questions his own "being", a being who stands at a distance from himself and who has to be his "being."