The Treasury of Loyal Retainers (1748) 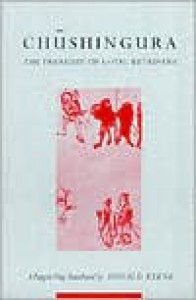 Kanadehon Chūshingura is a play written for the Bunraku theater in 1748 by Izumo Takeda, Shoraku Miyoshi and Senryu Namiki. According to Donald Keene, "The most famous and popular work in the entire Japanese theatrical repertory is, beyond any doubt, Chūshingura." The play is based upon events some 50 years earlier in which a young Japanese lord wounded a representative of the Shogun (probably because he felt insulted by him) and was commanded by the Shogun to commit seppuku, which he did. The Shogun then went further, confiscating the lord's properties and casting out all his family and retainers. The now masterless samurai (ronin) of the late lord Asano revenged his death a few years later by attacking the flunkey's mansion, killing him and placing his severed head upon Asano's gravesite. After deliberating for some time and calling in the advice of leading philosophers (!), the Shogun commanded that the 46 ronin commit seppuku in their turn. Which, of course, they did. Not two weeks later the first play based on the incident was performed and promptly shut down by the authorities.

This story of duty resolutely carried out to the most extreme lengths resonated within the core of the Japanese people and became the basis for a nearly boundless waterfall of plays, novels and films. The works in this tradition are collectively referred to as Chūshingura, in honor of this play, recognized as the masterpiece in the tradition. Preceded already by many plays, including one by the great Monzaemon Chikamatsu, Chūshingura adopted elements from that burgeoning tradition going well beyond the historical facts and added some of its own. Later works in the tradition made additions/subtractions with differing emphases and interpretations. One can well imagine that the study of the Chūshingura tradition keeps an army of scholars busy. I'm not one of them, so I'll have to leave a comparative study aside here.

One of the non-historical adjustments made in Chūshingura and its predecessors was to transplant the events into the 14th century in order to placate the Shogun's censors. (In the early 1800's, Tamenaga Shunsui felt safe enough to move the setting of his novelistic fictionalization of the story, which I review here

back to the beginning of the 18th century.) Another was to make 47 the number of rebellious ronin, for that is the number of kana (letters, let's call them) in one of the main Japanese writing systems. This had already been done before the composition of Chūshingura, in which the number 47 occurs in further significant ways. In some texts the 47th ronin dies before the final attack for some reason or another.

The multiple authorship of this play, in which, according to experts, different authors wrote different acts, led to a recognized unevenness in quality among the acts, as well as inconsistencies in the characters, resulting in one particular character being played by one actor early in the play and by another at the end! But it also resulted in a great variety in the scenes, which has contributed greatly to the dominance of this particular play in the tradition, according to Keene.

Reading theater, as opposed to seeing it performed as intended, is problematic - one can only appreciate certain aspects of the piece. Not unexpectedly, the text is much less formal than Noh plays; there are long passages of natural conversation. The many moments when a Noh play intensifies its language to high poetry are absent in this play. The narrator's role is to describe the action and setting in lieu of stage directions in nearly the same manner as the narrator of an occidental novel. A modern Western reader needs to make very little adjustment in their literary expectations when undertaking this text.

Though I appreciated Shunsui's portrayal of mid-Tokugawa society, going well beyond the tale of the 47 ronin, this play is less sentimental and less repetitive than his novel The Loyal Ronins. The characters are more clearly and convincingly drawn, and, probably due to the lack of digression, the powerful underlying drama of the incident is more effectively brought to the fore in the play. Unlike the novel, the play builds up to the initial wounding of the flunkey, which, after all, precipitated all of the tragedy, in a foreboding manner that made the wounding ineluctable instead of merely a sudden hot headed act of anger (though, in fact, there is one). There are also moments of comedic relief, and consider this: A woman places her hand in a man's hand and indirectly suggests a tryst. At that moment, from a Noh play being performed in the castle wafts over to the pair the line "I approach the base of the pine and rub the trunk..." No prudes, these Japanese... Nor were they in the least prudish about violence - the many forms of violent death are described in great detail by the narrator.

This play, even more than the classic texts on bushido (the way of the samurai), brings home to me the terrible coherence and alienness of a culture willing to sacrifice absolutely everything and everybody to a code of honor in which duty to one's liege is far and away the highest value, where parents will sell their daughter into prostitution so that their son-in-law will have money to contribute to a monument to his deceased liege (and she goes willingly in the name of her duty to her husband and parents), just to mention one example of many. It is made clear in the play that not everyone is equal to the demands of this duty, but that those who are are the most admirable of human beings. Now imagine that this play would be at the center of your culture...

Though later adapted for the Kabuki theater, Chūshingura was originally written for the unique puppet theater called Bunraku. Briefly, the puppets are large and not manipulated by strings from above or hands from below, but by three operators garbed in black who stand behind the puppet in full view of the audience. The operators are silent. One man at the side of the stage, the Tayu, accompanied by a samisen player, recites all the parts as well as his part of narrator. A little introduction, as well as excerpts from a performance, can be seen here:

A lengthier broadcast may be found here:

Keene provides an excellent introduction and footnotes to help the lay reader with orientation and context.